The Tonypandy Riots of 1910

This November sees the 100th anniversary of the Tonypandy Riots. These short-lived but seminal series of events have always held a special place in the memories of most Welshmen, attracting legends and stories, truths and half-truths in equal number - Churchill sent in the troops, Churchill held back the troops, Willie Llewellyn's chemist shop was deliberately spared by the rioters, the shop was off the main street and so the rioters missed it, and so on. As with most folklore, the truth probably lies somewhere in between all the various stories and reports.

The riots took place on the evenings of 7 and 8 November 1910, and involved violent clashes between striking miners and members of the Glamorganshire Constabulary - backed up by both the Bristol and the Metropolitan police. Involvement of the military was, at most, rather limited.

In 1910 the Cambrian Collective opened a new seam at their Naval Colliery in Penygraig. It was decided that a test period to determine the rate of production or extraction should take place, an investigation involving a small corps of just 70 miners.

When they saw the results the company promptly declared that the men had worked far too slowly - a strange allegation considering that miners at that time were paid by the tonnage of coal they produced rather than an hourly rate. They had, quite simply, no reason to work slowly.

Whatever their motives, the mine owners now instituted a lock out and closed the mine, not just to the 70 'test men' but to all 950 workers at the colliery. The miners responded by calling a strike and when the Cambrian Collective duly brought in strike breakers from outside the area it was clear that serious trouble lay ahead.

The South Wales Miners Federation (the Fed as it was universally known) balloted workers on 1 November and within days 12,000 men from all the Cambrian pits were out on strike.

Lionel Lindsay, Chief Constable of Glamorganshire, knew that his resources were stretched as there was already a month old strike at pits in the nearby Cynon Valley. As soon as the Fed announced the strike he appealed to the War Office for troops to help with the crisis. None were sent but by Sunday 6 November extra policemen from forces such as Bristol's had been brought to the Rhondda Valley.

By now the only pit left working was Llwynypia Colliery where strike breakers were maintaining the pumps and other machinery. On the evening of 7 November striking miners surrounded the colliery and, as tempers began to boil, stones were thrown.

Fierce hand-to-hand fighting with the police took place and after several baton charges the miners were pushed back into the square at Tonypandy. There they were charged by mounted police from Cardiff and there were several injuries on both sides. Lionel Lindsay again asked for military backup.

Winston Churchill, as Home Secretary, was not desperately keen to send in troops, feeling that people on the spot were perhaps over reacting. He ordered that soldiers, despatched by the War Office from barracks at Tidworth, should be held back, kept in readiness at Cardiff and Swindon. Churchill did agree, however, to send in an extra 270 mounted and foot officers from the Metropolitan police force.

These men, along with those already in the Rhondda, were exceptionally hostile to the miners, acting, apparently, more like an army of occupation than regular detachments of police. Their attitude served only to infuriate the striking miners.

Further rioting occurred on the evening of 8 November. This time the windows of many shops in the town were smashed, and a large number of the shops were looted by men at the end of their tethers. It was reported that miners, and their wives and children, were parading around Tonypandy in clothes taken from the shops and that a general air of festivity seemed to abound. 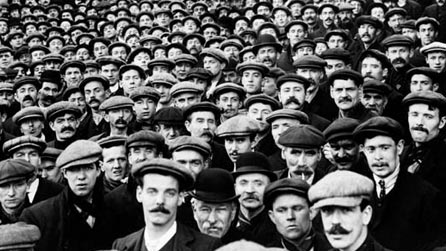 Image of crowds of men in Tonypandy 1910 (photo courtesy of tonypandy2010.com)

Detachments of the Metropolitan Police arrived in the town square just before 11pm, several hours after the rioting began - they had been busy protecting the homes and property of the mine owners - and by then the disturbances had, in the main, already subsided. Whether or not their presence in the town centre could have prevented the rioting is something that remains unknown.

It was not until the following morning, on 9 November, that soldiers eventually arrived on the scene, patrolling without serious incident in the Tonypandy and Llwynypia areas. There were clashes in Porth and Pontypridd but, generally speaking, the soldiers were - at the time, at least - more welcome than the policemen from outside the valley.

The strike ground on for several months although the violence of the initial riots in Tonypandy was rarely repeated - even though one miner died, it was said, from injuries inflicted by a police baton during an altercation. The strike finally ended in August 1911, 12 months after the lock out that had begun it. It left bitter scars on the community of the Rhondda, particularly as the miners were forced to return to work after agreeing to a paltry figure of just two shillings and three pence per ton of coal extracted.

Churchill was, until his dying day, reviled by many as the man who sent in the troops - even though he had, initially, held them back. The fact that he and other members of the government were even prepared to consider their use was, in the eyes of many, his worst failing.

And Willie Llewellyn's shop? Unlike so many of the businesses in Tonypandy it was left untouched by the rioters. One theory was that Willie, as a Welsh rugby international and a member of the famous 1905 side that had beaten the All Blacks, was a much-loved son of the town - and nobody was going to damage his business. It remains a matter of conjecture.

There are a whole host of events taking place to mark the anniversary of the Tonypandy Riots. Find out more on www.tonypandy2010.com.