This summer, from July 31 until August 7, the town of Ebbw Vale is due to play host to the National Eisteddfod of Wales.

It is not the first time Ebbw Vale has been chosen to accommodate a major social or cultural event.

This is the second time that Ebbw Vale has hosted the National Eisteddfod of Wales and in 1992 it hosted the Garden Festival, a celebration that attracted thousands of visitors over a short six-month period.

This year will undoubtedly see many more visitors to a town that has a proud and distinguished history.

Ebbw Vale is now renowned as a mining and steel-producing town but, for many years, this was a rural and rather desolate spot.

Sitting at the head of the Ebbw Fawr River, the town now has a population of over 25,000 but back in the 13th century, when the Norman invaders under William de Braose first came to the area, there was no town at all, just scattered houses and the occasional farmstead dotting the hills and valley sides.

This part of what is now the county borough of Blaenau Gwent was, for many years after the Norman conquest, an area inhabited only by sheep farmers who also, sometimes, turned their hands to the rearing of mountain ponies. And so it continued until the end of the eighteenth century.

Then came coal and iron!

Coalmines arrived first but when the Ebbw Vale Iron Works was founded in 1778 a town soon began to spring up around the engineering plant.

By the end of the Napoleonic Wars in 1815 the town's population had increased from the recorded figure of under 150 in 1881 to about 1200 - and all in the period of just thirty years.

As might be expected with such a population boom, conditions in the town - sometimes known as Pen-y-Cae in these early days - were primitive and crude. It was not until the second half of the 19th century, after the working day was shortened and the hated "truck" shops were abolished, that things began to improve.

The Chartist movement had a strong base in the area and, later, trade unionism was equally as important to the iron and steel workers.

Ebbw Vale even boasted its own Board of Health, a local precursor to the National Health Service, which was set up in the 1850s. It was a system that miner and future town MP Nye Bevan saw in operation and undoubtedly used as a blue print when he came to found Britain's Health Service in 1946.

In 1866, following national trends and demands, the Ebbw Vale Iron Company began producing steel. The company name was changed to the Ebbw Vale Steel, Iron and Coal Company and, under the relatively benign direction of men like Abraham Darby and Thomas Brown, began to develop and grow at a phenomenal rate.

The company managed to survive the Depression of the 1930s and, in the years after the Second World War, passed out of private ownership and was absorbed into the British Steel Corporation.

However, following the destruction of the mining industry in the 1990s, the writing was already on the wall for Ebbw Vale - as with much of Britain's industrial heritage - and the steelworks closed in July 2002.

The steel works may have gone but history and legends about the town and works live on.

It is said that 40,000 bricks from an engineering plant at Beaufort, a bare mile to the north of Ebbw Vale, were used to construct the Empire State Building in New York while it is a known fact that both the Sydney Harbour Bridge and the Stockton and Darlington railway lines were built using steel from the Ebbw Vale works.

The National Eisteddfod of Wales has a noble and fascinating history.

That history can only be extended when the Eisteddfod returns to Ebbw Vale in the summer of 2010. 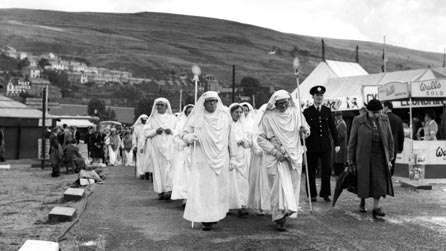 The Pavillion, at the National Eisteddfod 1958, held in Ebbw Vale 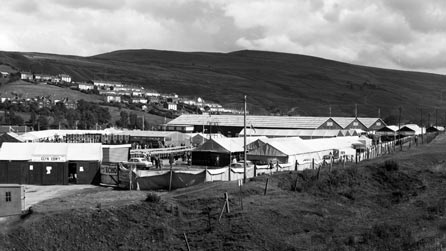 The concert precession at the National Eisteddfod 1958 in Ebbw Vale 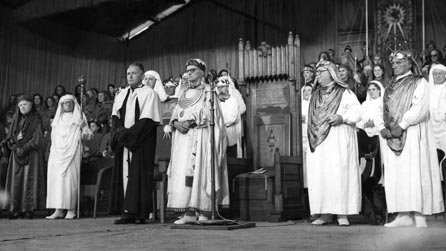 The Chairing of the Bard at the National Eisteddfod of Wales