Time was every community in Wales had its own "fleapit" cinema, showing two features a week - and a special show on Sundays. They were the social centres of the town, people dressing in their best clothes and queuing round the block to get a seat.

Cinemas had their origins in the travelling picture shows, the Bioscopes, which were part of the fairs that visited towns across the country in the late nineteenth century. People like Harry Scard, Mitchell and Kenyon and, in particular, William Haggar not only showed films, they also made them.

Beginning with short features such as A Ride On The Mumbles Railway and a film about the Boer War - actually shot in the Rhymney Valley - Haggar saw a niche in the market and was soon producing early classics such as The Life And Death Of Charles Peace and The Maid Of Cefn Ydfa. The Charles Peace film about the notorious Victorian burglar and murderer was shot in Pembroke Dock and is the oldest extant British story film.

By the end of World War One most Bioscopes had found themselves permanent homes, the Haggar family creating cinemas in places such as Lanelli, Pontardulais, and, in particular, Pembroke. William Haggar retired to Aberdare but the cinemas continued to be owned and run by his sons. The Pembroke cinema was established by William Haggar Jnr, being taken over, in due course, by his son Len. It was always a family concern. 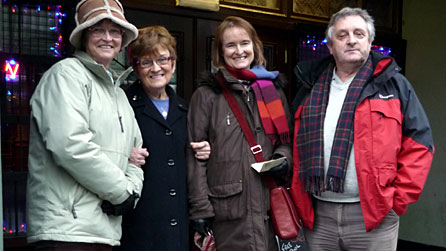 "We were always being brought in to sell tickets or ice cream," says Sarah Haggar, granddaughter of Len, "it was just something you did. Years later I became an actress and I think my love of the stage and acting came from my involvement with Haggar's Cinema when I was young."

Selling ice cream in the cinema was not a job for the faint hearted as Len's daughter Dinah recalls:

"One evening I was told to sell ice cream and the picture that night was a desert one, Lawrence Of Arabia or something like that. I didn't really know what to do so I just went up to people and said 'Do you want an ice cream?' Of course, on the screen there were miles of sand and nothing but blazing heat. I think we broke the record on ice cream sales that night."

Haggar's Cinema closed in 1982, the last privately owned cinema in Wales and the building - once Pembroke's Assembly Rooms - now operates as a nightclub. William Haggar, always conscious of providing entertainment for the people, would probably have been pleased.

"I'm proud that my family were amongst the pioneers of British cinema," says Susan Haggar, great granddaughter of William Haggar. "And also to think that they provided so much entertainment for so long to the people of Pembroke."

The story of William Haggar and the cinema in Pembroke is told on The Past Master, first broadcast on BBC Radio Wales, 28 February 2010.