This page has been archived and is no longer updated. Find out more about page archiving.
Error: Too many requests have been made during a short time period so you have been blocked.

Ninety-five years ago today, 31 July, Welsh poet Hedd Wyn died in action in World War One at the battle of Passchendaele.

The poet's poignant story is well known in Welsh culture. Hedd Wyn was the bardic name of Ellis Humphrey Evans, a shepherd and gifted poet from Trawsfynydd. 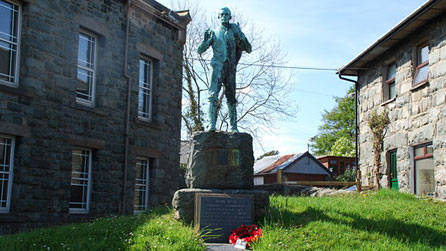 Having enlisted in the war, Evans finished and submitted his composition from the front. He died in the first day of action in the Third Battle of Ypres, better known as Passchendaele. Six weeks later on 6 September his name was called as the posthumous winner of the bardic chair at the National Eisteddfod.

His death in battle shocked not just those present at the Eisteddfod but the whole of Wales.

A stunned silence fell over the Eisteddfod field as the news finally began to sink in. The Archdruid summed up the feelings of the gathering when he said, simply "Yr wyl yn ei dagrau a'r Bardd yn ei fedd - the festival in tears and the poet in his grave."

There could be no question of any form of investiture and amidst a funereal silence the Bardic Chair, the Chair that now belonged to the dead poet, was solemnly draped in black cloth.

The Black Chair, as it became known, still resides in Hedd Wyn's family home, Yr Ysgwrn. Earlier this year it was announced that the Snowdonia National Park Authority (SNPA) had secured the property for the nation.

At the time of the announcement in March the SNPA were carrying out much needed repairs to the roof of Yr Ysgwrn.

I've recently been in touch with the National Park to see how the work is getting on, and to see if any other improvements at the site.

A spokesperson told me, "The work on the roof has now been completed along with some plastering work inside the house itself.

"Work has also been done to re-build a wall around the rhubarb garden in preparation for the Wildlife Gardening project, where local schoolchildren will get involved.

"Other maintenance work has been done around the site to tidy up the area; this is generally an ongoing process." 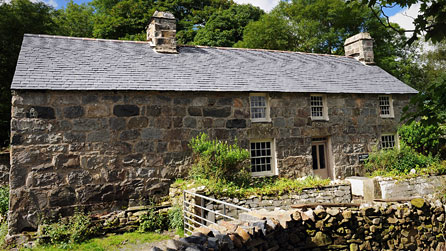 "The process to find a tenant to manage the land and outbuildings has also started. The SNPA have appointed a local company to oversee the tenancy application process which is expected to begin in August. The tenant will be responsible for looking after the land and livestock."

By the time you read this, probably something like one in three women in Wales will have read the so-called 'mummy-porn' sado-masochistic, bondage shlockbuster Fifty Shades Of Grey by EL James.

I spent some time in a branch of Waterstones the other week. There was a table, right at the entrance, piled high with copies of Fifty Shades and its two sequels. And in they all came. The mummy bit is right - many of them had pushchairs. You kept hearing them actually saying 'Oh, everybody's reading it...' which eventually began to sound like baa, baa...

After a while, I felt like torching the pile. But in the end I did what everybody else apparently was doing.

And, you know, it wasn't as badly-written as I'd been led to expect.

I mean, it isn't well-written - the the hero, or 'dominant', Christian Grey, billionaire owner of the Red Room of Pain, talks like an alien in an old SF movie, and every few pages the narrator or 'submissive', Anastasia, exclaims: "holy crap!"

It's interesting that the language doesn't get much stronger than that. Here's a woman who gives you hundreds of pages of hot bondage, and she's a prude about talking dirty.

We talk to KD (really name, er, Kathy Dickie) about Ms Holly and her adventures in an up-market sex club, appropriately called The Mount. Also the new genre of paranormal erotics, which features people having orgiastic sex with ghosts... possibly 50 shades, one after the other.

At this point, you should know that what Ms Holly is rolling around in her mouth at the top of this column is in fact a chocolate truffle. In a startling opening scene, KD Grace describes how a woman and a man can enjoy the same chocolate truffle in the dark. It's not for the squeamish, but actually more imaginative than anything in Fifty Shades.

For the publishing industry, what it signifies is the end of chicklit, the genre first aimed at socially and sexually aware young women in the 1990s.

The Queen of chicklit was Jane Green, whom we also meet in Sunday's programme. Now middle aged and living in the US with her second husband, Jane is not impressed by the new erotica. Her latest novel, The Patchwork Marriage, is fully-rounded in a way Fifty Shades doesn't even try to be, dealing in considerable depth with the problems of a woman marrying a man with two daughters, one of whom hates her.

Listen to Phil the Shelf on Sunday from 5pm on BBC Radio Wales.

The Wales Millennium Centre is one week away from the start of its début tour of Wales with its first full production, the Welsh-language Ma Bili'n Bwrw'r Bronco.

Produced in collaboration with Theatr na n'Óg, Ma Bili'n Bwrw'r Bronco (Bili does a Bronco) is the Centre's adaptation of Douglas Maxwell's Decky Does a Bronco, which was first performed by Scottish theatre company Grid Iron in 2000. It later proved a huge hit at the Edinburgh Festival.

In this Welsh adaptation the play is set in a playground on a housing estate in the Swansea valley.
Five young boys spend the summer of 1983 acting out their dreams and fears in their local park, play fighting and performing their new obsession, bronco-ing: standing on a swing seat and riding it as high as you can before kicking the seat over the bars.

Yet the boys' playful bickering is cut short by an unimaginable event during the play, and their lives change forever. 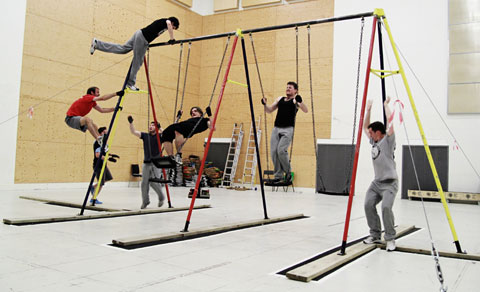 The play will open at The Marl, Grangetown in Cardiff on 31 July and tour across the country in August.

Surtitled performances will take place in Cardiff on Thursday 2 August at 7.30pm and on Saturday 4 August at 2.30pm and 7.30pm.

Take a peek at the new Doctor Who Experience

The 2012 Cardiff International Poetry Competition has lived up to its international name with Australian poet Mark Tredinnick winning the first prize of £5,000. Mark Tredinnick. Photo: Literature Wales Tredinnick, who lives near the Wingecarribee River near Sydney, scooped the...

The Writers' Spring: a revolution in the ebook world

No avoiding it any more. There's a revolution in the book world. Let's call it The Writers' Spring. Here's one of the leaders now, professing "a livid frustration with the self-serving, ivory-towered London publishing and agent elites who have been...

This information is temporarily unavailable.