From the Skerries to the Smalls, the automation of Welsh lighthouses

In September 1987 the Skerries lighthouse off the coast of Anglesey became fully automated. The lighthouse keepers were withdrawn and for the first time in 273 years the light ceased to be manned. The warning beams still shone in the darkness but there were no longer keepers on duty at the lighthouse for 24 hours every day.

The withdrawal of lighthouse keepers from their often lonely and isolated stations was part of an automation policy by Trinity House. The process had begun as far back as 1910 and reached something of a fulfilment in the 1980s, although it did not finally conclude until the North Foreland Light in Kent was automated in 1998.

There are over thirty lighthouses around the coast of Wales, several of them now decommissioned, running from the Point of Ayr in Clwyd to those of West and East Usk in the Bristol Channel. 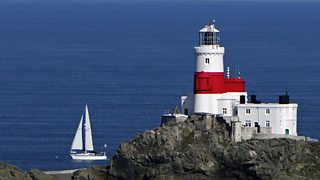 The Skerries lighthouse was first built on the remote group of islands known as the Skerries that lie off the north-west coast of Anglesey in 1716. It was a private enterprise and like many early lights, the owners levied tolls on the passing ships in order to make their money. Trinity House took over the running of the light in 1836 but only after much debate and bitter dispute with the owners.

Trinity House, a private corporation governed under royal charter, came into being in 1514. One of their three main functions has always been to operate as the official lighthouse authority for the country. Gradually, as the nineteenth century progressed, they took over control of more and more lighthouses, rebuilding them as and when necessary.

One of the lighthouses that had to be rebuilt was the Smalls. It was – and remains – the most westerly and remote light in Wales, being situated on an island or pinnacle of rock some 20 miles off the St David’s Peninsula. The original light had been built to a design by Henry Whiteside, a musical instrument maker from Liverpool. This flimsy looking structure resisted the wild Atlantic gales for 80 years until it was finally rebuilt by James Douglass in 1861.

The Smalls lighthouse has the distinction of being instrumental in creating a change of policy by Trinity House.

In 1801 one of the two lighthouse keepers, Thomas Griffiths, died in a freak accident. He and his fellow-keeper, Thomas Howell, had been known to quarrel violently so, rather than dump Griffith’s corpse into the sea and then possibly be accused of murder, Howell lashed the body to the railings while he waited for the relief boat. He had no real alternative as this was long before the advent of radio or telephone and if the weather was bad relief simply would not come. 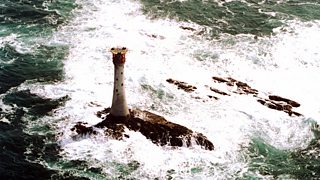 Unfortunately, the Atlantic gales were at their height and Griffith’s hastily made coffin was soon torn open by the wind. Apparently, his arm would flap against the window, as if tapping to get in. When the relief boat finally arrived at the Smalls, the crew found that Howell had been driven mad by the apparition. As a result Trinity House promptly arranged for all lighthouse teams to be made up of three men. It was a policy that continued until the automation process of the 1980s finally put an end to the need for lighthouse keepers.

Most, but not all, of the Welsh lighthouses were automated during the 1980s. The Flatholm light was automated in 1988 but was converted to solar power in 1997. The Caldey Island light was the last Trinity House light to be powered by gas and was only finally converted to electricity in 1997. Nash Point, built to warn sailors off the dreaded Nash Sands, was the last lighthouse to be manned in Wales. It was only finally automated in 1998.

Several Welsh lighthouses have been decommissioned and one or two of them have even been turned into hotels or self-catering apartments. The buildings around St Ann’s Head, at the mouth of Milford Haven, operate as a series of self-catering cottages while the light on the Great Orme outside Llandudno – standing on the top of a 325 foot cliff – is now an exclusive private hotel.

The West Usk lighthouse, standing at the juncture of the Usk and Severn Rivers, is an upmarket bed and breakfast location. It was built in 1821 by James Walker – who went on to create a further 21 lighthouses.

The lighthouses of Wales fulfilled a vital role in protecting sailors from the dangers of the rugged Welsh coast, particularly in the dangerous days of sailing ships. Many of them still do. But whether the lights are working or not, one thing is clear – they are a fascinating part of Welsh history.

A mild start for October, but turning fresher