In a country whose history occasionally seems to be dominated by the mining industry, it might seem strange to realise that the nation's longest lasting industrial dispute took place not in the mining valleys of the south but much further north, in the heart of Snowdonia. 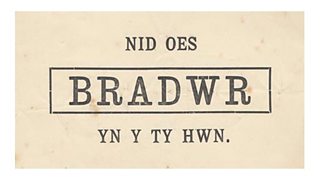 No Traitors in This House

The dispute centred on the slate quarries of Penrhyn at Bethesda and really consisted of three separate disputes, those of 1874, 1896-97 and the famous one of 1900-03. The disputes might well have been separate but, in the anger of the workforce and in the root causes that lay behind them, they were undoubtedly linked.

The after effects of the 1874 dispute saw the formation of the North Wales Quarrymens Union and while the industry remained largely disinterested in union activities, pressure to unionise was one of the main causes of the 1900-03 lock out.

The other issue of real dispute was the bargaining system of paying the men's wages. This was something that helped protect the earnings of the quarrymen, particularly when they were dealing with difficult and hard to manage rock faces. But, in the eyes of the managers, such a system gave the workers far too much autonomy and there is no doubt that they were searching for a way to break the power of the miners.

The discussions and disputes between the men, the union and the managers and owners of Penrhyn were acrimonious in the extreme. And as the 20th century began, anger welled over into direct action.

The lock out began on 22 November 1900, when 2,800 men walked out from the Penrhyn Quarries, withdrawing their labour in the time-honoured fashion. It was, therefore a strike – at least to begin with. However, the quarry owner, Lord Penrhyn, and his agent, EA Young – who was to play a central part in the events of the next few years - decided to hit back at the strikers and promptly refused the workers re-admission to the quarries. The lock out had begun.

The dispute lasted for three years and was one of great bitterness. There was a natural and well aimed sense of anger directed at the owner and his agent, the men who had closed the quarries and refused to allow a general return to work. But, more significantly, there was also great bitterness within the community itself.

By 1902 over 1,200 men had left the area, forced to find other employment in places like the coal mining valleys of south Wales. Arguably, such an emigration decimated the Gwynedd hills and valleys. By the end of that year almost 700 miners had gone back to work, forced to give in to Lord Penrhyn, who could afford to sit and wait with the quarries closed. The workers, who had families to clothe and feed, could not.

Such was the anger within the mining community that the houses of men still on strike often bore a sign in their windows: Nid Oes Bradwr yn yr Ty Hwn – No Traitors in This House. There is no doubt that the lock out created huge divisions within the quarrying community, which went deep and lasted for several generations.

Essentially, the dispute was between a system of privilege, represented by Lord Penrhyn – wealthy, Anglican, English speaking – and, on the other hand, one of want or need – the workers who were essentially monoglot Welsh speakers and Nonconformist. Both sides were intransigent, each determined to win their point, but however you define it, the lock out was a time of great hardship for everyone who was denied access to work.

There was huge support right across Britain for the men and families of Penrhyn. Collections were taken and sent to Bethesda while at least three choirs went on tour, raising funds for the families back home. The press seized on the events taking place in north Wales and the whole concept of lock out came to symbolise the struggle of the working man against oppression and tyranny.

Eventually, of course, the wealth and power of Lord Penrhyn won the day. The miners were forced back to work – at least, those who had remained in the Bethesda area – on his terms.

The lock outs had, however, set in motion a grievous blow to the Welsh slate industry. Deprived of raw materials, builders simply looked elsewhere for the slate they needed. By the outbreak of World War One in 1914 the workforce in the north Wales quarries had fallen from nearly 20,000 to just over 10,000. The Depression that followed the war simply made matters worse.

The Penrhyn Quarries lock out remains the longest running industrial dispute in British history. In the end it went some way towards destroying the slate mining industry but, more importantly, it had already destroyed many lives and families along the way.