It was in 325 AD that the Emperor Constantine convened a meeting of Christian bishops in Nicaea (known as The First Council of Nicaea) and amongst other things agreed a date for Easter which would be observed by all Christians.

As a result, Easter became a moveable feast with no fixed date but would always fall on the first Sunday after a full moon following the March equinox.

This year Easter Sunday falls on 20 April after a particularly busy celestial week, with a spectacular lunar eclipse over the Americas, the International Space Station orbiting Britain, and Mars making its closest approach to Earth in six years.

Celebrated by many different religions and cultures, the British interpretation of the word Easter is said to have come from the Anglo-Saxon word Eastre, Eostre or Eoaster.

The name is said to refer to Eostur-monath, a month in the Germanic calendar when feasts were held in honour of the Pagan goddess, Eostre.

This and other Pagan rituals such as Hallowee'n were cleverly merged with Christian festivals by Emperor Constantine in order to keep both the Pagan and Christian faiths happy and maintain his popularity.

One thing that isn't so clear is why we associate Easter with rabbits and eggs. 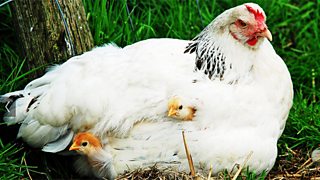 Chicken and chicks by JBR.

The general consensus is that rabbits come from Pagan symbolism, representing fertility and new growth which accompanies the spring equinox.

Rabbits are excellent at reproducing, but the eggs are a little trickier as rabbits clearly don't lay eggs, not in Wales anyway.

Rabbits do, however, bear a striking resemblance to those mad March hares which, unlike rabbits, give birth above ground and not in burrows.

The young hares, known as leverets, lay hidden in the long grass found along field boundaries to avoid detection from predators such as buzzards and foxes.

Lying motionless and perfectly camouflaged, the young leverets can often be found sharing the same space as lapwings which adopt a similar technique for their own eggs and young.

It's therefore possible that people assumed that hares laid eggs, as both creatures are found in the same habitat during the Easter period. 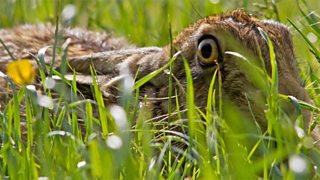 A hare hiding in long grass by Anthony.

Interestingly, the first references to the Easter bunny originate from around 1620 in the Alsace region on the French/German border where half of all French beer is brewed.

After a few pints of beer, a hare, laying an egg, might not seem quite so implausible.

Eggs also have a long association with fertility and rebirth. The Egyptians and later the Greeks believed that the fiery Phoenix was reborn from a single, scorched egg.

Whatever their history, Easter eggs have been popular for centuries. In 1307 Edward I’s household accounts included an entry that listed: 18 pence for 459 eggs to be boiled and dyed or covered with gold leaf and distributed to the royal household. 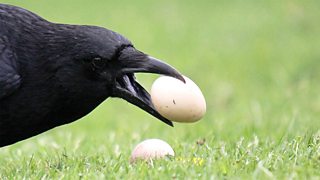 As for chocolate Easter eggs, one theory suggests that the Protestant Queen Elizabeth I passed a law allowing hot cross buns (associated with Catholicism) only to be sold during Easter and Christmas holidays.

Due to the buns' popularity throughout Europe, chocolate-makers decided to cash in on the seasonal Easter trade and created solid chocolate eggs.

However, others believe that chocolate eggs are a much more recent invention than that and date from the 19th century with John Cadbury producing his first solid chocolate eggs in 1842.

Have a great Easter weekend and if you wish to remain sane, don't mix beer from the Alsace region with your chocolate eggs and bunnies.