Pagan myths surrounding mysterious egg-laying hares seem to have stemmed from the similarity between shallow hollows or 'forms' used by hares to rest and rear their young, and the nests of birds such as plovers or lapwings - also built at ground level on open grassland or arable farmland.

As such, people would sometimes find eggs in what looked like hare forms - giving rise to the belief that hares laid eggs in spring. 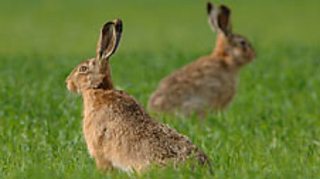 However, despite their firm foothold in folklore a steady drop in hare numbers during more recent times fails to reflect their status as a traditional symbol of spring.

In fact, some studies have shown that just 20 per cent of the numbers from a century ago are still left today. This is partly due to modern farming practices and changing patterns of land use.

The species has little legal protection either and is the only game species in Britain which doesn't have a close shooting season.

Because of this decline the brown hare has been deemed a UK Biodiversity Action Plan species since the mid 1990s and among the aims are a doubling of the population by the year 2010.

Here's truly hoping then that it's not a case of 'hare' today and gone tomorrow for these wonderful creatures.

The Easter Bunny on BBC h2g2