The Meyricks of Bush House

If you were to drive through the grounds of Pembroke School, midway between Pembroke and Pembroke Dock, you would undoubtedly catch a glimpse of a rather grand, anachronistic and substantial Victorian/Edwardian building known as Bush House.

Bush House sits among the trees of the old Meyrick estate and looks somewhat out-of-place, surrounded by the modern buildings of the comprehensive school - almost like a building lost in time.

It is now a residential home for elderly people but for many years this was the home of the Meyricks, a family that was hugely influential in south Pembrokeshire in the 19th century. 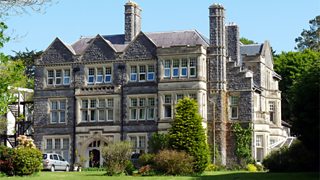 Perhaps more importantly, the Meyricks played a vital role in the creation of Pembroke Dockyard, the only Royal Naval yard ever to exist in Wales.

The Meyricks originated in north Wales. During the 16th century Rowland Meyrick became Bishop of Bangor before marrying Catherine Barrett of Gellyswick - a substantial holding on the north shore of Milford Haven.

Their sons settled in Pembrokeshire, with one of them, Francis, deciding to live at Monkton on the outskirts of Pembroke. From him came the Meyricks of Bush.

Over the years Francis Meyrick's influence grew and he, like his siblings and children, came to hold public office in the county. Many of the Meyricks became, almost by default, MPs, JPs or county sheriffs. Above all, however, they remained important landowners

During the 18th century many acres of land in Pembroke and Pater (the original name of the area on which the dockyard stands) changed hands, passing from one leading family to another.

The land at Pater, skirting and over-looking the Cleddau River and Milford Haven, seemed of little value. It was farmed by tenant farmers and, several years earlier, the Ordnance had purchased a portion of it to build a fort.

The fort was to be part of a protection system for Milford Haven - always open to invasion as the earlier landings of Owain Glyndwr and Henry Tudor had clearly shown.

As it transpired the fort was not required and by the beginning of the 19th century it remained on the shores of the Haven, only partially completed.

The other major landowners in the area at the time were the Adames and Owen families.

Stories of gambling, drinking and profligacy were rife and it’s almost certain that many of the exchanges of land came about as payments of gambling debts.

Reckless spending also contributed and the last of the Owens, John, ruined himself by unwise spending on his estates at Orielton and in fighting Parliamentary elections.

By the end of the 18th century the Meyricks had houses at Llanion on the shores of Milford Haven and on the estates at Bush.

Local legend states that Admiral Horatio Nelson stayed in the house at Llanion but by 1802 the place had been abandoned and was in a state of disrepair - possibly after a disastrous fire in the house and its stables.

Leaving Llanion, Bush House duly became the main residence of the Meyrick family. The Meyricks could hardly believe their luck when, in the years around 1813, the Admiralty began buying up land from them for a new Welsh dockyard. 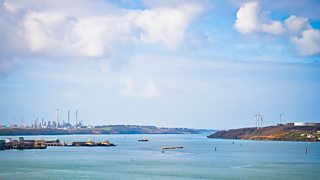 Views over Milford Haven taken from the Cleddau Bridge by Alexander Jones.

Seizing their chance, they quickly sold huge parcels of land to the Admiralty and the Ordnance, becoming very rich and creating a little bit of history in the process.

Even so, they were still astute enough to retain parcels of land to the east of the new dockyard where they built and leased out plots of land for houses that later became the town of Pembroke Dock.

Bush House was burned down in 1866 and the family moved, for a short time, to another property at nearby Bangeston.

By 1906 the house at Bush had been rebuilt and the family moved back. They remained there until the 1950s when the house and its surrounding estate were sold to Pembrokeshire County Council.

The Council decided to build a new grammar school on the estate while Bush House became a residential unit for youngsters who studied a combined agriculture and grammar school curriculum on the farm which the school established.

Many of the pupils came from different parts of the UK in what was a unique and fascinating educational experiment.

When the school became a comprehensive in 1972 the need for a unit like Bush House declined and it closed at the end of the decade. After standing empty for a while Bush House eventually became a residential home for the elderly.

The Meyrick's of Bush were an influential and dynamic family. They clearly seized their opportunity to make money but, even so, had little idea that they would be instrumental in creating one of the premier building yards in Britain.

This year, 2014, Pembroke Dock celebrates its bicentenary and it would be nice to think that the Meyricks could also be remembered.

Saharan sunsets and sand but no camels