A town called Bethlehem – in Wales

When we stand in church or chapel this Christmas Eve and sing the carol O Little Town Of Bethlehem, most of us will be thinking of the settlement in the Holy Land, famous as the birthplace of Jesus Christ.

Yet there are 16 other communities called Bethlehem in various parts of the world. And Wales can lay claim to one of the smallest, the tiny hamlet of Bethlehem in Carmarthenshire, home to about 150 people. 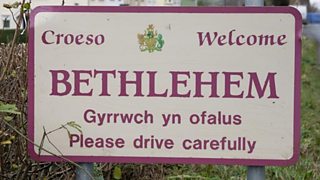 Like its Palestinian namesake, this remote and peaceful village on the foothills of the Brecon Beacons is set in the foothills of a mountain range. Sitting in the Tywi Valley, to the northeast of Llandeilo, the Welsh Bethlehem is a quiet and secluded spot just across the river from the main A40 road.

Quiet and secluded, that is, apart from in the month of December. For that is when thousands of people flock to the village in order to post their Christmas cards and receive the unique Bethlehem postmark on their letters.

Bethlehem lost its post office during a round of economic cuts in the 1980s. But since the mid 1960s the tradition of posting Christmas cards from the village had been growing stronger and stronger. As a consequence, the post office was reopened in 2002 – as someone once said, it might have been a Christmas miracle.

Normally the post office – situated in the old village school (also closed) – opens for just a few hours every Tuesday afternoon. But in the Christmas season demand for the Bethlehem stamp is so strong that the place is forced to open six days a week. People come from all over Britain, even from places as far away as America and Germany, just to get that classic stamp on the front of their envelopes. 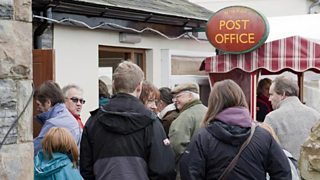 The Welsh Bethlehem is overlooked by an old Iron Age fort, Carn Goch, and is six miles equidistant between two other significant fortresses, the Welsh castle of Dinefwr and the Norman fortress of Carreg Cennen.

The name Bethlehem came into common parlance in Wales once Bishop Morgan translated the Bible into Welsh in 1588. While the village was originally known as Dyffryn Ceidrich (Ceidrich's Valley in English), the name Bethlehem was soon given to the local chapel – which can still be seen just off the main street.

By the time of the Methodist Revival in the middle years of the 19th century, however, the village was being called by the name of its chapel rather than its original title.

Unlike the Bethlehem in the Holy Land, the Welsh Bethlehem does quite often get snow. The place is used to shepherds but that is about as far as the similarities go. Interestingly, it lies 120 miles to the south of another Welsh village with a Biblical name, Nazareth (now spelled Nasareth) in the Nantlle Valley of Gwynedd.

Bethlehem and Nazareth? The Biblical connotations and the connections with the life of Jesus are fascinating. They remain an important part of the religious and social history of our country.

My Christmas: the hospice nurse