The drovers of Wales

The story of the American west and of the huge cattle drives that took place in the 1870s and 1880s are well known. And yet the concept of cattle driving, of taking cows and other beasts to market or sales centres, began not in the USA but in Wales. The Welsh cattle drovers were a hardy and famous breed of men and their story has already gone down in legend. 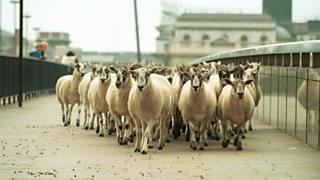 Flock of sheep in London

The drovers were, quite simply, men who drove herds of cattle from one place to another, perhaps to market, perhaps to summer pastures. They drove cows, geese, turkeys, anything that needed to be moved, and sometimes their herds were 300 or even 400 strong.

The term "drover" was used for anyone taking cattle long distances; men who took cattle on short journeys were simply cattle drivers. It was a nice but serious distinction - certainly for the men involved - as the drovers revelled in their standing as an important, charismatic and tough bunch of individuals.

There is evidence of early drovers' roads in Wales, some of them dating back to Roman times. Many of the roads have since been incorporated into our modern road structures, although some have not. They are often characterised by sudden dog-leg turns to right or left, depending on things like the prevailing wind. A sudden turn gave protection from driving rain and sleet, something that was vital for men who would spend all day in the open air.

Drovers in the Middle Ages

By the Middle Ages the drovers' roads, usually wider than other ancient tracks to allow for the passing of large herds of animals, snaked right across the country. Drovers' roads usually traced a line through wild and windswept countryside, particularly once the Turnpike Trust system was introduced and when passing through a toll gate involved paying a significant fee. It was harder but much more economically viable to take the mountain route!

Drovers tended to travel on foot, usually four or five to a herd. Perhaps the better off men might ride on horseback, but on foot was more normal. They were assisted by well trained dogs that were sometimes sent home alone once the drive was over. The dogs, their homing instincts well developed, followed the same route back and often "lodged" in the same inns that the drovers had stayed at on the outward leg.

The drovers would, of course, have already paid for the dogs' food and accommodation. The drovers themselves probably spent three or four days in the pubs and inns of London or wherever they found themselves, spending their hard-earned money before returning for another trip and another herd.

By the end of the 18th century the practice of driving Welsh livestock to markets in England was well established. Smithfield Market in London had become the largest and greatest cattle market in the world but Welsh beef was also sent to places as wide-ranging as Kent, Birmingham and Manchester. The demand for Welsh (and Irish) cattle in fast-growing urban centres like London was constant. At times it seemed as if the English market traders could never get enough.

In 1794 over 10,000 cattle were exported from Ynys Mon - by 1810 that figure had risen to over 14,000 - and there are wonderful descriptions of the cows swimming in one dark mass across the Menai Straits. Castlemartin Blacks, the almost mythical South Pembrokeshire cows, were particularly sought after and it is on record that, in 1804, at one fair or market in Cilgerran over 20,000 cattle were seen, waiting to be driven away to England.

The drovers were rough, tough men who were more than capable of holding their own in any confrontation with the locals they encountered on their journeys. Indeed, such was their reputation that they were regarded with fear and awe in most of the towns or villages they passed. They would drive their herds wherever they pleased and if crops or fences got in the way, that was just too bad.

On occasions the drovers put up for the night in a wayside inn or tavern, where the attentions of the local girls would have been most welcome. Often, though, nightfall found the cattle herd high up on the mountain and then the drovers would have had no option other than to sleep beside their charges on the cold ground. It was a hard, spartan life so it was no wonder that when the opportunity for a little leisure and comfort presented itself, the drovers grabbed it with both hands.

And yet, there was more to these cattle drives than mere bullying tactics. The drovers acted as messengers, as the carriers of news and, in an age where geographical mobility was severely limited, they were often responsible for carrying money and important documents for people.

In the years leading up to the Civil War in the 1640s it was the drovers who carried the Ship Money (one of the main grievances against Charles I and, ultimately, one of the immediate causes of the war) from the local collectors to the Treasury.

It is well known that, by moving money and deeds around the country, the droving trade helped promote banking in Wales. The Black Ox Bank at Llandovery, for example, was founded by drovers in 1799 and survived until 1909 when it was finally amalgamated into Lloyds Bank. 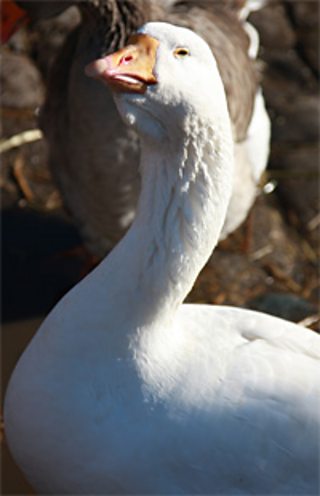 Carrying out financial transactions for people on their route to London or home soon became an essential part of the drovers' trade. They kept account books and spoke English - an essential skill for anyone trading in England. So they were educated men to whom the droving trade was a vocation. They did not make huge sums of money; the dealers were the men who made themselves fortunes, not the cattle drovers.

At the turn of the 18th century Haverfordwest drovers, on a drive to Ashford in Kent, earned just three shillings a day, plus a bonus of six shillings when all the cattle had been sold. Hardly the stuff of which millionaires are made. And those sums could increase or decrease according to the economic climate and the laws of supply and demand.

It was not just cows that were transported by the drovers but, whatever was being herded, all the livestock was always well prepared for the trip. Cows were fitted with iron shoes in order to protect their hooves and geese were given leather boots. Turkeys had their feet tarred.

The coming of the railways in the 1840s and 1850s spelled the end of the droving trade. With the advent of fast steam locomotives a journey that had previously taken five or six drovers many days or weeks to complete could now be done in a matter of hours. The last recorded large scale cattle drive across Wales took place in 1870, and the last sheep drive was in 1900.

The Welsh drovers were a unique band of men, tight knit and proud of their heritage. But even they could not stand in the way of progress and now their story has passed into legend.