Some of the most serious riots in British military history took place between 4 and 5 March 1919 in the Canadian Army Camp at Kinmel Park in North Wales. 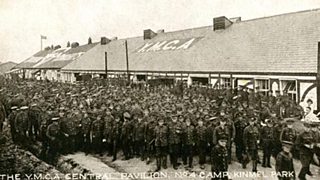 Kinmel Park, just outside Abergele, was a transit camp for Canadians waiting to be repatriated to their homeland after their service to the British Empire during World War One and at the time of the riots held almost 15,000 soldiers.

Originally it had been intended to send the Canadians home directly from France but many of these men had relatives in the United Kingdom that they wanted to visit. This was understandable and, as it was unlikely that most of these men would ever be in a position to visit them again, transit camps were established across Britain in order to facilitate this desire.

Kinmel Park was a huge staging camp where troops of all regiments and military specialities were housed, the soldiers being accommodated according to the military districts of Canada from where they came rather than in the long-bonded regimental units that had seen them through the war years. The men did not know the officers and there was a clear mood or feeling of alienation in the air.

This, in itself, was enough to create problems but when, in late February 1919, it was learned that troop ships originally allocated to the Canadians had been re-allocated to the American forces - who had certainly not served in France for half as long as the Canadians - it caused understandable and huge resentment.

Then came the news that the Canadian 3rd Division - know to the military authorities as the Fighting Division - was to be given priority over other Canadian troops. The men at Kinmel were outraged, both at the implied slander on their reputations and on being once again pushed down the list for repatriation.

Conditions at Kinmel Park were very basic. The place was a sea of mud and strikes had held up the delivery of both fuel and food supplies. As a result the men were on half rations and as many had received no pay for over a month, even the delights of the canteens in Tin Town - a large, privately run establishment set outside the military camp - were beyond their means.

They were sleeping 42 to a hut in accommodation that had been designed for no more than 30. Men were taking it in turns to sleep on the floor and most of them had only one blanket to keep them from the cold of a north Wales winter. Several delegations were sent to the senior officers in the camp, protesting about conditions and the way the men felt they were being treated. Nothing was done.

Then, on 1 March 1919 there were rumours that tempers had boiled over and that one of the canteens in Tin Town had been looted. That same day some of the soldiers refused to go on a route march and Colonel Colquhoun, the camp commander, became very concerned. It did not stop him going off to Rhyl for a social evening on 4 March and in his absence large numbers of muttering soldiers began to gather together in groups to sound off about the conditions they had to endure.

In the early hours of the morning, with tempers growing more and more frayed by the second, discontent finally spilled over into direct action.

Several leaders were appointed by the men, one of them being Sapper William Tsarevitch, and when some of the groups moved off to raid and loot the camp Quartermaster's Stores the call "Come on the Bolsheviks" was heard. Fires were soon started in Tin Town and the officers' and sergeants' messes were looted.

Officers quickly established a defensive perimeter and ammunition was issued to those soldiers considered to be trustworthy and loyal. The rioters had a few rifles but, in the main, they had to improvise weapons, strapping razors to broom handles or sticks.

When 20 of the mutineers - because it was by now considered a full scale mutiny - were seized the rest simply charged the guardroom and set them free. Rifle shots were exchanged and, when casualty figures were later added up, it transpired that three rioters and two guards had been killed in the affair. Many others had been wounded or injured.

The rioting continued until 4.30 in the morning of 5 March when things seemed to fizzle out and the officers regained control of the camp.

In the aftermath of the mutiny - although the term riot is probably more accurate - 78 of the Canadians were arrested. Twenty-five were convicted of mutiny and sentences of between 90 days detention and 10 years' penal servitude were handed out by the military courts.

There was no great conspiracy to mutiny at Kinmel Camp, rather it was something that just happened due to a variety of different causes. Yet the military and those in command needed to fix or apportion blame, at the same time absolving themselves from fault.

As far as many in authority were concerned, despite the appalling conditions at the camp, one of the root causes was the growth of socialism. Set in the context of the time, with recent communist revolutions and uprisings in Russia and Germany, it is relatively easy to see how they reached this conclusion. The fact that the officers did not ensure that the men knew their concerns were being heard and understood was conveniently forgotten.

Following the riots priority was given to repatriating the Canadian troops. The affair was, as far as possible, "hushed up" and by 25 March over 15,000 Canadians had been transported home. The tragedy is that it could not have been done earlier.

The death of Alun Lewis

A wild walk around Parc Slip