The traditional theatre-going experience of putting your glad rags on and enjoying a small tub of ice cream in the interval is perhaps becoming a thing of the past.

Some of the unusual locations used by National Theatre Wales of late - military training ranges, beaches, village halls - seem to support this idea.

Yet Theatre Rue, a touring theatre company based in Machynlleth, are taking things a step further with their latest production. You’ll even need a hard hat.

The setting for their latest play Life And Death Underground is literal, as the action takes place in the old Braich Goch slate mine in Corris.

The play dramatises the plight of a Victorian mining family in the 1870s when production at the mine was at its height. 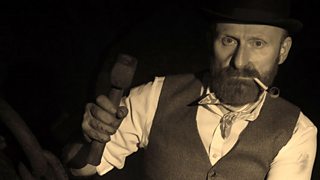 I asked the writer/director of Life And Death Underground, Nicola Burgess, a couple of questions about the production:

How did the idea of staging a play in a slate mine come about?

"It started with Mark Waite and the Corris Mine Explorers. Mark is an expert on the mines in the area and has researched them very thoroughly. He is also very experienced in caving and climbing.

"About three years ago I went on one of his Corris Mine Explorers tours. We went deep into the mine and Mark showed us the artefacts and relics of times and the tools that the miners had left behind when the mine closed in the early 1970s.

"The underground chambers, or 'bargains' as they were called by the company, which were created by human endeavour, dated back to the 1800s and the story of the lives of the quarrymen made a deep impression on me.

"I felt that it was a local history story that should be told and that the bargains themselves would lend themselves as an extraordinary performance space. I was also excited by the possibility of writing and performing their story in the place where it actually happened.

"The chance to illustrate the working lives and conditions of the miners in the actual space where they worked was too good to miss."

What can the audience expect from the play?

"The audience are taken on a guided tour as 'investors' in the mine. Their guide is Mr TB Thompson, an agent for the mine, who leads the audience to a working chamber to see the rock men at work and to see how their 'investment' in the mine is being spent.

"It is a factual performance, everything that the audience is told is actual fact as far as we can ascertain, and the miners are using authentic tools too. The feedback from the audience is that it is educational and thought provoking, which is exactly what we want it to be.

"The audience get to go underground into an actual old slate mine. They will learn about the workings of the mine and the lives of the men who worked there. The story that unfolds is lit by candle and lantern light, and they can expect to be surprised and moved by what they learn." 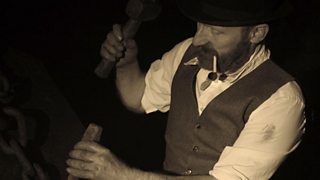 Have you encountered any difficulties due to the challenging underground nature of the venue?

"We haven’t encountered difficulties as such, but there are a couple of restrictions do to the nature of the venue. The first is that we can only take 30 people underground at a time, so the audience numbers are restricted, and secondly there is no wheelchair access.

"Authenticity is the key, so the venue has not been altered in any way to accommodate the audience, they have to adapt to the space they are presented with. To get to the entrance of the mine the audience have to walk up an embankment track, so sadly the performance is not really suitable for the very elderly or infirm. Also, only children eight years old and over are admitted."

Will the audience have to wear hard hats and other safety equipment to watch the performance?

"Yes, hard hats are provided and must be worn at all times underground. In order for the audience to be comfortable in the underground environment we advise them to wrap up warmly - preferably in a waterproof coat - as the temperature underground is a cool eight degrees all year round, and to wear strong walking boots or wellingtons as the ground is a little uneven and there can be large puddles."

Life And Death Underground runs on every remaining Wednesday throughout August 2012, with two performance each Wednesday at 4pm and 7pm.

For more information or to book tickets (Adults £10, children £7): 01654 761244, email info@corrismineexplorers.co.uk or call into the Corris Mine Explorers reception.