Welsh romantics certainly seem to be well catered for in the first few months of 2012. On Wendesday 25 January it is St Dwynwen's Day, a far more significant day for the Welsh than St Valentine's Day. The Welsh patron saint of lovers lived in the fifth century and, at her convent on Llanddwyn off the coast of Anglesey, it was said that the eels in her fish ponds could foretell whether or not lovers would live long, happy and mutually rewarding lives.

As if that was not enough, 2012 is a leap year and that, of course, means that there is an extra day in our calendar - 29 February. A centuries-old tradition says that, for the course of that extra day, many of society's norms and traditions could be happily ignored. Chief amongst these changes was the belief that, for one day at least, women could ask men to marry them.

Such a belief was not a uniquely Welsh custom but there are many more old traditions relating to the courting and marriage process that clearly do have their origins in rural Wales. They come from times long before the relentless industrialisation of the country, with its huge social and geographical mobilisation, destroyed much of the ancient Welsh culture and belief systems.

In pre-industrial Wales courting was an important and, often, lengthy process. The tradition of a man carving love spoons for his beloved is well known but its origins remain unclear.

Possibly it might have begun with sailors, far away from loved ones on long sea voyages. Such an activity, like the art of carving and decorating whale bones, would at the very least have helped to pass the time. An alternative explanation might be young men, sitting - fully chaperoned - in front of the farm house fire with their future wife and her family, passing the long evenings by carving and whittling at pieces of wood.

The intricate spoons, decorated with keys (symbolising the key to the man's heart), wheels (I'll work hard for you) and beads (showing the number of children he would like) have become famous and are now synonymous with Welsh courting customs.

The Welsh tradition of rhamanta was a way of trying to see into the future - in particular the romantic future. Rhamanta took many different forms.

In Glamorgan a young couple would place a shovel on top of the fire and put on it two grains of wheat. As the shovel grew hotter the grains would edge towards each other, swell and grow. Eventually they would pop off the shovel - if they jumped off together the boy and girl could expect to jump into matrimony. Jump separately and they would go off in different directions to lead different lives.

In Pembrokeshire a shoulder of mutton, pierced by nine bore holes, would be placed under a girl's pillow - not the most romantic or hygienic arrangement and certainly not very comfortable. With her shoes arranged in a T shape at the foot of her bed - but only after an incantation had been said above them - the girl would duly expect to see her future lover in her dreams. 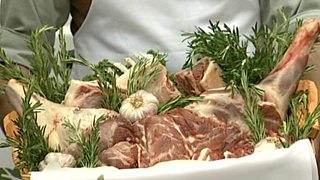 The Maid's Trick was performed on Christmas Eve or on one of three designated Fairy Nights. The fire was made up and a feast of food was left on the table while the girl washed her undergarments in fresh spring water. The underwear would then be left to dry on the back of a chair in front of the fire and, with the door unlocked, the girl would retire to bed.

Her future husband would then supposedly come and eat the feast. It is tempting to ask how many cats, dogs and even tramps from the neighbourhood availed themselves of the warm fire and the food - not to mention the illicit pleasure of being in the same room as the young girls' clean underclothes! 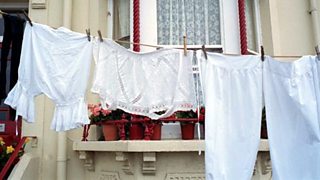 Everything in these pre-industrial days was geared towards marriage and, eventually, to the procreation of children. They were, after all, the future of the farm and the village. For a long time it was customary to plant rue, with its bad scent, or even nettles and thistles on the graves of old, confirmed bachelors as a way of discouraging celibacy. The practice was also extended to unmarried women - hardly the most caring of things to do.

The custom of jumping the broomstick - now taken to mean eloping or running away to get married - originated with newly wed Romany couples in Wales leaping over flowering broom, again as a fertility rite. The custom gradually spread beyond the gypsy families, developing into the Welsh tradition known as priodas coes ysgub. Here the couple used an actual broomstick that was wedged into an angle of the doorway.

Some of the more simple traditions on the wedding day included the throwing of confetti as the happy couple left the church. This developed from a pagan ritual where grain was tossed at a newly married couple in order to ensure a fruitful union. All Welsh brides believed that it was lucky to be woken by birdsong on the morning of their wedding while no Welsh bride wanted to receive first congratulations from another woman - wishes of good fortune from a man were much luckier.

Welsh brides also believed that if, by some chance, their wedding dress was torn on the wedding day then it denoted a bright and happy future. The wedding dress, incidentally, was not white. Brides traditionally wore their "best" dress for the wedding and it was not until Anne of Burgundy was married to Louis XII of France in 1499, clad in a white dress, that the colour became popular.

One peculiarly Welsh tradition was that of kidnapping the bride on her wedding day. This was done by the bride's family, just before the ceremony took place. The groom and his family would set off in hot pursuit and, obviously, rescue the bride. One version of this custom declared that whoever actually freed the bride would themselves be married within the year.

The bridal bouquet usually contained a cutting of myrtle, a traditional symbol of love. This bouquet would be given to the bridesmaid to carry and if she then planted the myrtle (and if it bloomed) it indicated that she would soon marry. Welsh brides also carried a pin in their wedding gown. At some stage the pin would be thrown over her shoulder. Whoever found it would soon marry - at best a dangerous practice, at worst a deadly one.

In times of economic distress or hardship the Welsh custom of marriage by contribution was often practised, although it was frowned on by the higher echelons of society.

Every guest was expected to bring food to the wedding breakfast or, occasionally, a gift of money. It was also customary for the poorer members of the community to visit the homes of rich or better off farmers prior to their weddings in order to ask for a donation of cheese which was then added to the meal after the wedding.

Many of the Welsh courting and marriage customs disappeared once the Industrial Revolution changed the look and nature of the country. Some, however, have evolved and are still in use today. They remain a fascinating glimpse of a way of life that has gone forever and on 29 February they are at least worthy of being remembered.

Islet interview: "Doing It Together"

Where have all the birds gone?