Until the final years of the 18th century there was no such thing as standard time in Britain. In each town across the country the time of day was decided, firstly, by the simple process of consulting a sun dial and then by the creation of local time.

In reality, this meant that the further away from London you were, the greater the discrepancy from Greenwich Mean Time (GMT). So the furthest reaches of west and north Wales, Pembrokeshire and Gwynedd, were as much as 20 minutes behind London. Even Oxford was four minutes out, while Bristol was no fewer than 10!

It seems incredible to us, used as we are to a regulated and standardised time scale but that was the case right up to the middle of the 19th century. 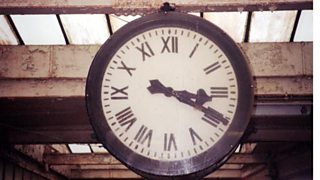 The station clock at Carnforth Station in Lancashire

Such irregularities meant little while there were limited means of communication between one part of Britain and another. A few minutes here and there were immaterial. But when the railway boom came in the 1840s, it quickly became apparent that things would have to change.

The Great Western Railway (GWR) company, running trains to the west country and Wales, soon found that there was considerable confusion as far as guards, station masters and the all-powerful railway timetables were concerned. Watches were having to be continually altered as the trains moved rapidly from one 'time zone' to another, perhaps within the space of just 20 or 30 miles.

And, of course, with trains beginning to run from all parts of the country such confusion invariably led to an increasing risk of accident and collision.

In November 1840 GWR announced that a standardised time – railway time as it was called - would be observed at all their stations. Several other railway companies followed suit and on 22 September 1847 the Railway Clearing House decided that GMT should be adopted as the standard time on all railway stations across the country.

The process was fraught with difficulty as, to begin with at least, towns and villages saw no reason to change their traditional means of telling the time. The ludicrous situation arose where the town railway station at, say, Cardiff, Bridgend or Neath kept one time, and the towns themselves kept another.

As late as 1845 the company was forced to put an addendum on its timetables stating that while London time – as dictated by the Royal Observatory at Greenwich – would be observed at all of its stations, the time in the towns would be different. So the time in Reading might be 12 noon but on Reading station it was 12.04. Confusing, or what?

At some stations such as Bristol clocks were even erected showing two separate times, railway time and local time.

Clearly the situation could not last. Local officials in towns and cities across England and Wales realised that the change had to be for the good of all and by 1855 it was estimated that 95% of towns and cities in Britain had altered their time to the standard GMT.

It was 1880 when government legislation finally settled on a single standard time zone for the country but by then most towns had seen the writing on the wall and had already made the necessary changes. And it was all thanks to the GWR – God's Wonderful Railway.

The stories behind the Welsh headstones in Grand Forks, British Columbia