Grassholm Island or 'Gwales' in Welsh was the first RSPB reserve to be established in Wales back in 1948 so it's fitting that in this centenary year RSPB wardens - Lisa and Greg Morgan are fighting to combat an issue that affects the third largest gannet population in the Atlantic - plastic. 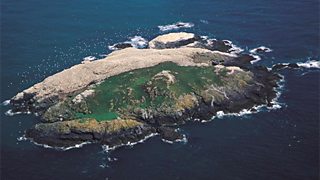 Every spring, roughly 40,000 pairs of breeding gannets descend on this small patch of rock, situated eight miles off the Pembrokeshire coast, south west of Ramsey Island.

Marine debris is now a major problem throughout the world's oceans with vast, floating islands of debris being reported - from industrialised areas right across to the most remote regions on the planet and Grassholm Island is no different.

This particular gannet colony is now on the front line. Where once seaweed and kelps fronds were used as nesting materials, they have now been added to by synthetic rope, plastic, discarded fishing nets and mono-filament fishing line.

This doesn't happen by accident though. The birds actively target these floating materials as they resemble seaweed, are easy to spot on the surface and highly visible to the male birds seeking nest materials out at sea. 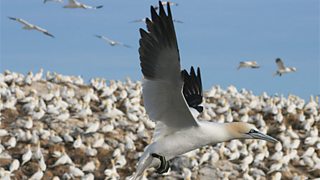 Gannets are very 'site faithful' creatures and will return to the same nest location year after year, rebuilding and repairing each season, making this a long term problem.

RSPB warden's visit each October when the majority of birds have left, to keep disturbance to a minimum.

Most birds can be freed successfully, others simply have to be put out of their misery as plastic has entwined around their wings and caused permanent and irreparable damage. 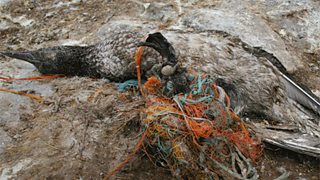 Plastic entwines around their legs and wings causing death - image by RSPB Cymru.

A team from the Marine Biology Ecology Research Centre, Plymouth University and RSPB have been monitoring and studying the situation on Grassholm since 1996 and have estimated the total amount of plastic on Grassholm to be a staggering 18.46 tonnes.

The average gannet nest contains 469.91 grams of plastic with the majority of nesting material being synthetic rope.

On average, just over 65 birds each year die from entanglement which equates to around 525 gannets (mainly nestlings) over an eight year period and yet although this is a fairly high number, it is unlikely to have an effect on the overall population which is doing very well in the UK compared to other seabird populations. 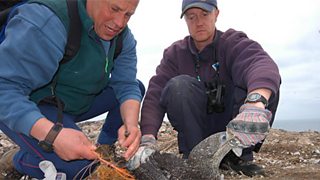 A young gannet being cut free from plastic on Grassholm - image by RSPB Cymru.

The plastics comes from a variety of sources both domestic and international as well as shipping but all have one thing in common - they don't biodegrade, so will remain in the nests for many years to come and added to each year.

The team have also been doing some ground-breaking work using geo-locaters on the gannets, monitoring where they go to forage for food and how far they fly.

For the first time, we are beginning to build up an accurate picture of sea birds' movements which will play an important role in their future, as conservation groups lobby for more marine reserves and protected zones to be established further out to sea, around these important offshore wildlife havens.

The reserve has a strict no-landing policy and even the scientists and wardens looking after the birds are limited to a crew of just eight per visit.

Despite this, thousands of day trippers cram onto spotter boats throughout the summer months hoping to catch a glimpse of this natural wonder, as 80,000 gannets turn a small, low lying rock in the Irish Sea, white. 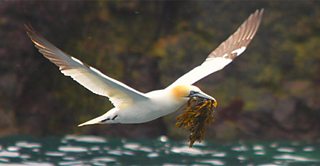 A gannet in flight off Grassholm Island by Ade Owens.

There are also plenty of other seabirds to see as well as dolphins, porpoises, minke whales and even orca which visit the area in summer.

Beneath the waves however, other larger marine creatures are equally affected by plastic pollution.

These gentle, giants of the deep travel huge distances each year to feed in our nutrient rich Welsh waters which during the warmer months are brimming with their favourite food - jellyfish.

According to the Marine Conservation Society, over 170 species of marine wildlife have been recorded as mistaking marine litter for food, resulting in starvation, poisoning and fatal stomach blockages.

On 1 October 2011, Wales became the first UK country to introduce a charge for single use carrier bag and it is hoped that over time we'll start to see a decline in plastic related deaths in the seas around Wales.

The Welsh government is keen to follow Ireland's example of a 90% reduction in carrier bag use, however there are still exemptions for bags on board ships, trains, aircraft, coaches and buses.

A small team from RSPB and Autumnwatch team landed on Grassholm Island to film the gannet's plastic nests which will be featured in BBC Autumnwatch on Friday, 11 November.