Wilbur and Orville Wright are commonly accepted as the first men to design and fly a power-driven aeroplane. But there was one man, in west Wales, who might just have beaten the brothers to the punch. His name was Bill Frost and in the eyes of many he is the person who deserves the epithet of 'the first man to fly'. 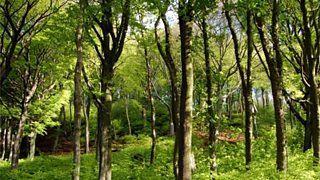 Bill Frost's flying machine flew about 500 yards before being clipped by a tree (image: Gale's Photo)

Bill Frost was born in Saundersfoot on the Pembrokeshire coast on 28 May 1848. The son of John and Rebecca Frost, he became a carpenter on the Heyn Castle Estate in Saundersfoot.

Although a relatively poor man, he became obsessed with the concept of flying. According to legend, in the winter of 1876 he was carrying a long plank of wood while a gale was blowing and the wind - always strong and powerful on that stretch of coast - simply picked him up and carried him several yards through the air. Frost's obsession was born.

Frost was a religious man, and became deacon of his local chapel. He was also an accomplished musician and founded the Saundersfoot Male Voice Choir. But his real interest lay in flight.

Locals, it was said, had seen him running about the fields holding a piece of zinc above his head, perhaps hoping that the wind would once more lift him into the air. The people of the town put this bizarre behaviour down to the grief he was experiencing since his wife and daughter had recently died. It was more likely to be Bill Frost testing out the concept of aerodynamics.

In 1894 Frost applied for a patent for a flying machine; the design was registered on 25 October that year. The machine was something of a cross between a glider and an airship, and was equipped with two reversible fans designed to lift the machine into the air.

Bill Frost built his aircraft in the workshop of his house on St Bride's Hill in Saundersfoot. It was over 30 feet in length and was apparently made of bamboo, canvas and wire. The gas bags or pouches that helped keep the craft aloft were filled with hydrogen.

Unfortunately there are no photographs or written testimonials but Frost - and many people from Saundersfoot - claimed that he flew in his glider/airship on or around 24 September 1896. He travelled, it was claimed, for about 500 yards, a distance that, if true, was considerably longer than the Wright Brothers managed seven years later in 1903.

The flight was not without incident, however. The undercarriage of the machine caught in a tree and he crashed in a field. Although Frost managed to repair the flying machine, disaster was waiting to happen.

Despite being tethered to a tree the machine was totally destroyed in a storm, with pieces spread over a wide distance. Frost had neither the money nor the time to start again and his patent lapsed after four years.

The story of Bill Frost and his flying machine is a fascinating one. Unlike the Wright Brothers he did not have any independent witnesses to the event or, most important of all, any photographic evidence that he had taken to the air.

Bill Frost died in March 1935. By then he was nearly 90 years old and was both blind and poor. He was not bitter but bemoaned the fact that the government, following his first flight and the disaster that befell his machine, had turned down his request for funding.

The government stated that they had no intention of using aircraft either for navigation or for warfare. In the light of the later development of aircraft during World War One, it seemed to Frost and everyone else to be a strange and rather short-sighted statement.

Everyone who knew him was clear that Bill Frost was the most truthful of men. If he said that he had flown then he most certainly had done so. At this distance, however, and without written or photographic proof, it is hard to come down, one way or another. The story remains one more fascinating episode in the history of flight - and of Wales.

From another kingdom: Fungi