Art Across The City invades Swansea

If you're out and about in Swansea this weekend and you happen to see Bonnie Tyler's head in the Castle Gardens, fear not.

Bonnie's head forms just one part of five new temporary public art works that have been commissioned for Art Across The City, a public art project that gets underway this Saturday.

Temporary art installations have been springing up all over Swansea in readiness for the event. It has been organised by the artist-led Locws International, who specialise in working with artists to create temporary art in public spaces in the city.

Art Across The City will showcase 12 very different pieces of art by a selection of international and UK-based artists, five of which been commissioned and created especially for the art trail event.

These include a Guitar Hero-inspired video game by artist David Blandy that features Dylan Thomas and Jock Mooney's images of alternative Swansea icons – such as Bonnie Tyler – skewered together to form his piece Swansea Kebab. 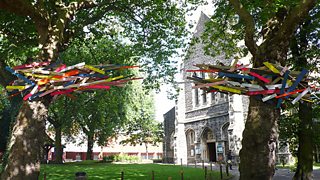 I put a few questions to Locws International's project manager, Gordon Dalton, to find out more.

How did Art Across the City come about?

"Locws International was formed in 1999 by a group of artists including our now director, David Hastie. Since then we have commissioned over 70 artists to make art in the public realm. Art Across The City has grown each time, and we now commission up to 10 artists per year."

Can you tell us about the five new temporary works: what can people expect to see?

"I'm very excited about the new commissions. They are all in the city centre within five minutes walking distance. The public won't be able to miss them as they are situated where people shop, where they work, where they socialise. 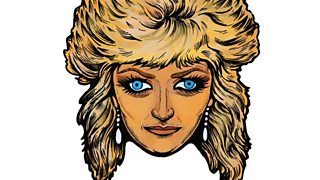 Image of Bonnie Tyler that forms part of Jock Mooney's Swansea Kebab. Courtesy of the artist and Locws International

Why is public art important/important for Swansea?

"I wont make any great claims for social change or world peace, but put simply it creates curiosity. A simple "what is that?" can open up a whole conversation, new ideas, or even just a different way at looking at your surroundings.

"Hopefully it can create a sense of ownership or pride. Getting two people talking in a bus stop or having an ongoing debate about the state of our high streets are equally important.

"At the very least I'd like to think there will be some people who would say 'do you remember when that giant Bonnie Tyler head was in Castle Gardens?'"

Do you have any highlights or favourite pieces?

"I can't separate them at all to be honest. They were all commissioned with the aim of being big and bold in the city centre, and they all succeed. Each artist has taken a different path but they all sit together well. Working with artists is the best part of the job.

"If I was to predict what would be "popular" then I'd say Jock Mooney's heads or David Blandy's video game, just because of the nature of the work. David Marchant's piece on Wind Street will have a huge audience, not least because it was partially created by the people who frequent there, but he's a local artist with a strong following.

"Tatham & O'Sullivan's piece is quite deceptive and Fiona Curran's work will draw attention because of where it's situated."

How can the public get involved with Art Across The City?

"The video game is for two players, based on a Guitar Hero battle, so that is very hands on. You have to choose to play as the Swansea Devil or Dylan Thomas.

"We'd also like people to interact with us online via our blog, Facebook or Twitter. We'd like to see as many people as possible sending in their own pictures of the artworks. We also have our Locws Schools programme and we'll be doing guided tours and talks."

What's next for Locws International?

"We've already commissioned new artists for two events in 2013 and are now looking at 2014, where we want to consolidate all our work so far into a biennial event. We'll be commissioning up to 15 artists, hopefully bringing back some old favourites and building on our Art Across The High Street programme. It's a very exciting time." 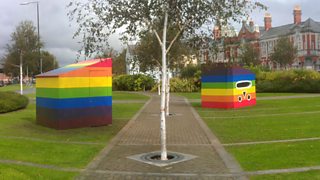 Art Across the City runs from Saturday 29 September until Sunday 11 November 2012. For more information see locwsinternational.com.

Stunning Snowdonia film to be screened in deep mine

Festival of sung and spoken word at Dylan Thomas' birthplace