The Bishop's Palace at Lamphey

The Bishop’s Palace at Lamphey in Pembrokeshire has been called 'the most perfect ancient ruin.' The statement is quite possibly true, something that will engage most visitors in interesting debate. One thing is certainly clear, however – the ruins of the old palace are quiet, serene, peaceful, compelling and somehow strangely comforting.

The Bishop’s Palace is situated in the village of Lamphey, just over two miles to the east of Pembroke. The village is small, with a population of about 250 people, and the palace sits several hundred yards to the north of the community. 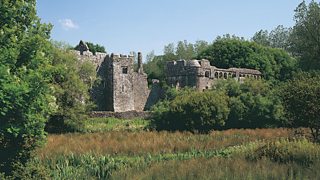 The ruins that remain today date from the 13th and 14th centuries, the palace having been built in three separate stages, each one slightly larger and more opulent than the previous. It was created to provide accommodation for the bishops of St Davids and much of what now remains was built by Henry de Gower who was bishop between 1328 and 1347. Ever mindful of the status of the bishop, he was also the man who created the sumptuous and magnificent Bishop's Palace alongside the cathedral at St Davids.

While the palace at Lamphey may not have been as spectacular as the one at St David’s, by the middle of the 14th Century it was a luxurious and inviting halt for the bishop and his retinue when they were on their tours.

In the medieval period bishops were respected, venerated even, and it was important that the palaces and other houses that they used reflected their dignity and standing.

As a result, at Lamphey there were over 20 well-appointed rooms as well as fishponds, orchards, fruit and herb gardens to provide quality meals that the local populace could only dream about. Inside the palace, after a hard day’s ride, the bishop could lie back on his cushions and through the wide, elegant windows, gaze at sweeping parklands where cattle and deer grazed in untroubled splendour. 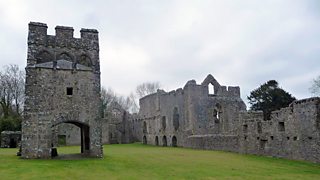 A huge staff of cooks, servants and gardeners were employed all year round – and, in what were still troubled and dangerous times, there were even bodyguards to protect the bishop and his household.

For the modern visitor, there are two significant courtyards in the palace. The ruin of the 13th century Hall, to the south east of the main complex, is the oldest surviving part of the building. The Western Hall, added somewhere around 1270, was possibly the work of Richard Carew who was bishop between 1256 and 1280.

The Dissolution of the Monasteries in the reign of Henry VIII meant that the bishops lost much of their status or standing in the country – and with that, of course, went many of their holdings and much of their land. The Bishop’s Palace at Lamphey was surrendered to the crown in 1546 and passed on to Richard Devereux, who used it as a private residence. His heirs, the Earls of Essex, owned the old palace for over 100 years.

Queen Elizabeth’s favourite, Robert Devereux Earl of Essex, was executed after a failed rising – it has never been clear quite what his intentions really were – in the final years of Elizabeth’s reign after his miserable campaign in Ireland in 1599. The Earl’s spectre or ghost is said to haunt the ruins at Lamphey – minus his head, naturally enough.

The palace was garrisoned by parliamentary soldiers during the English Civil War, when John Poyer and Rowand Laugharne held Pembroke against the Crown. In that bitter and long-lasting war, Lamphey Palace and its fertile farmland provided the town of Pembroke and its castle with much needed supplies and stores. 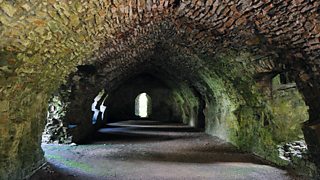 The palace was bought by the Owen family of nearby Orielton in 1683 although how much they used the place has never been clear. By the 19th century Lamphey Palace was in a bad state of repair and when the Owens sold it to wealthy Charles Mathias of Mathry in 1821 it was clear that the new owner had considerable work to do.

Charles Mathias duly restored many of the buildings and redeveloped the old walled garden but he had no intention of living in the palace. He had acquired nearby Lamphey Court at about the same time as he bought the palace and this was clearly a much more amenable location. He promptly demolished the original buildings and rebuilt it.

The Mathias family lived in Lamphey Court until 1978. The building is now Lamphey Court Hotel, the Georgian building blending easily and elegantly with the old medieval ruins that lie alongside it.

Over the next hundred or so years, with little or no real usage, Lamphey Palace began to decay – but elegantly so with the result that what is now left is “a well preserved set of ruins.” The building came under the care of the Ministry of Works in 1925 and now, under the management of CADW, it is one of Wales’ Historical Monuments.

Lamphey Palace had one more moment in the limelight recently when it was featured in the BBC TV series The White Queen. Normally, however, it simply basks in its own solitude. It is the perfect place to wander, to think back over its history and just reflect on life. The Bishop’s Palace at Lamphey remains a different type of historical monument.

Living in the Love of Eleri Sion