Prince Madoc and the Discovery of America

Who discovered America? It's a simple question and one that usually brings the standard response - Christopher Columbus. But here in Wales we have our own theory. And that theory says that America was actually discovered 300 years before Columbus sailed "the ocean blue" in 1492 - and more importantly, that it was discovered by a Welshman. 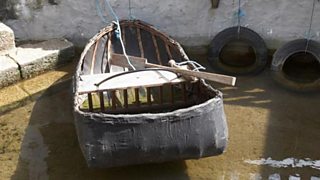 Mandan Indians used Bull Boats for transport and fishing that are identical to the Welsh coracle.

The man in question was Prince Madoc, the son of Owain Gwynedd, one of the greatest and most important rulers in the country, and while the legend cannot be corroborated there are many who believe it implicitly. Owain Gwynedd certainly existed, his reign being marred by long and hard-fought disputes with Henry II, king of England.

The story goes that in 1170 Owain died and, almost immediately, a violent and very bloody dispute arose between his 13 children regarding the succession. Madoc and his brother Rhirid were so upset and angered by events that they decided they wanted no further part in what was happening. Indeed, they wanted nothing more to do with their family or their homeland. They duly took ship from Rhos on Sea (Llandrillo) and sailed westwards to see what they could find.

What Prince Madoc found, so the legend runs, was America. He and his brother managed to cross the Atlantic and land on the shores of the New World. Madoc returned to Gwynedd for more men, then sailed off again, this time never to return. His sailors inter-married with a local Native American tribe and for years the rumour of Welsh speaking Native American tribes was widely believed. It is, of course, the stuff of legend but like all good legends it has at least a grain of truth about it.

As America was explored and colonised several Native American tribes were discovered, speaking a language that did actually sound quite like Welsh. That was not the only connection. The Mandan Indians used Bull Boats for transport and fishing, vessels that were identical to the famous Welsh coracles. It was all too good for storytellers and poets to ignore. The legend lasted well into the 19th century and even the explorers Lewis and Clark were instructed to keep their eyes open for these "Welsh speaking Indians" while they were trekking through the interior of the country.

The earliest reference to such a people can be found in a Welsh poem by Maredudd ap Rhys who lived and wrote in the years between 1450 and 1483. However, it was during the Elizabethan period that the story gathered momentum and grew.

There was a political agenda behind the spreading of the legend - it was a ploy, used to assert the right of England to the lands of the New World. Put quite simply, Welsh colonisation of America, many years before, was a convenient justification for Elizabethan settlement in a territory that had already been claimed by Spain.

Starting with Humphrey Llwyd in 1559, the story was embroidered and developed - the detail of the Welsh speaking tribe comes from this period. Even recognised experts in the field of navigation and exploration, men such as Richard Hakluyt, consciously and deliberately wrote about the legend as if it were the absolute truth. Sadly, there is no absolute historical or archaeological proof - even Lewis and Clark were unable to find that - but it remains a great story, one that we in Wales have taken to our hearts.

Other people have not been quite as happy to believe the story of Prince Madoc. In 1953 the Daughters of the American Revolution set up a plaque on the shores of Mobile Bay in Alabama. On the plaque it stated that it had been erected "In memory of Prince Madoc," who was in the opinion of the Daughters of the Revolution the original discoverer of America. The plaque did not last long and was soon removed by the Alabama Parks Department.

For Welsh men and women, however, the story of Madoc's discovery of America remains special - even if, in our heart of hearts, we know that it is probably not true. And as the saying goes, why let the truth get in the way of a good story?

Comedy Port kicks off in Newport