Hallowe'en. A time when people avoid churchyards and cross roads, places where, in ancient times, spirits were thought to gather. A night of spooks and demons, witches, ghosts and ghouls - at least, that's how children see it. 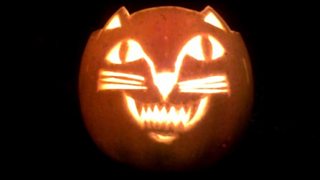 These days the night before All Hallows Day has been "Americanized" to the extent that nearly all Christian and pagan connections with the time have been forgotten under a welter of witches hats and trick or treat games. But there used to be much more to Hallowe'en and here in Wales the traditions of Galan Gaeaf, as the night is called, go back many generations.

The origins of Hallowe'en celebrations are a little unclear. Certainly it is the eve of All Hallows or All Saints Day, a major Catholic festival. It is also the eve of a pagan Celtic festival of the dead, a time when spirits were thought to walk the earth. This festival was known as Samhain and 31 October and 1 November each year are now a time when Christian and pagan celebrations intertwine for a brief period.

In rural communities, long before the industrialisation of Britain destroyed many of the old traditions, the end of autumn and the first day of winter - 1 November - was a cause for celebration.

The harvest had been gathered in, excess livestock had been culled or killed off and put into storage for the coming year. It was very much a communal festivity, a time for celebration and enjoyment. Everyone, from the farmer to the lowest cow hand, had participated in growing crops and keeping the animals and now they would celebrate together.

Often this manifested itself in the traditions such as the harvest mare. Corn would be fashioned into the shape of a horse and hung above the hearth. But getting the harvest mare into the house was a cause of much horseplay - the origin of the term - when women tried to prevent it coming inside, soaking it with water, and the men attempted to keep it dry.

In Wales 1 November, the first day of winter, was called Calan Gaeaf. The night before - the eve of the day - was referred to as Nos Galan Gaeaf or, occasionally Spirit Night. And many traditions gradually grew up around the festival. Almost inevitably, they were connected with all things frightening or disconcerting.

One of these was called Coelcerth. A fire was built, everyone placing stones with their names on in and around the fire. If any stone and name were missing the following morning, that person would die during the coming year. It is easy to imagine the thrill of apprehension and horror as people looked for their stones in the cold light of day!

Being frightened soon became an essential part of Galan Gaeaf. The image of Y Hwch Ddu Gwta, a black sow without a tail, accompanied by a headless woman, that would together roam the countryside, terrified everyone on Galan Gaeaf when the best place to be was inside your house in front of a roaring fire. 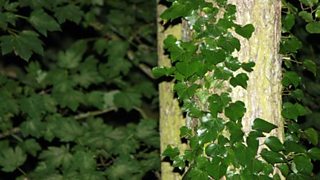 Even then there were dangers. Touching or smelling ground ivy was thought to make you see hags or witches while you slept. In order to see into the future boys were told to cut 10 leaves of ivy, throw one away and put the rest under their pillows. For girls seeing what would come was a much more rigorous process. They had to grow a rose, train it around a large hoop, then slip through the hoop three times before cutting the rose and placing it under their pillow when they went to bed that night.

Traditions changed, of course, with each region or part of the country altering things to suit themselves. The American custom of trick or treat actually has a Scottish origin, guising as it was known, while modern customs such as apple bobbing or the lighting of bonfires on Hallowe'en night go back many years.

Traditionally, if a woman wanted to see the face of the man she would marry, on Hallowe'en night she would darken her room and look into the mirror. The face of her future bridegroom was supposed to materialise behind her. If, however, a skull was to appear, it meant that she would die before the year was out. In Pembrokeshire in the 1950s this tradition had changed to the more simple one of never looking into a mirror on Hallowe'en or else you would see witches and demons in your sleep.

In the 18th century, as Britain changed from a rural to an urban country, many - but not all - of the Hallowe'en or Galan Gaeaf customs died out. The ghost story is one that has remained and 31 October each year is a time to bring out the tall tales and terrify yourself with visions of headless horsemen and spectral wraiths, knowing of course that when you wake up on 1 November everything will be back to normal. You hope!