Mike from The Cloud Appreciation Society has been in touch re: my last blog on strange cloud formations.

Apparently it's know as 'Fallstreak holes' in cloud circles.

"A fallstreak hole (also: hole punch cloud and punch hole cloud) is a large circular gap that can appear in cirrocumulus or altocumulus clouds.

Such holes are formed when the water temperature in the clouds is below freezing but the water has not frozen yet due to the lack of ice nucleation particles.

A fallstreak hole. Image courtesy of The Cloud Appreciation Society: 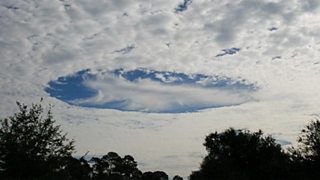 When a portion of the water does start to freeze it will set off a domino effect, due to the Bergeron process, causing the water vapour around it to freeze and fall to the earth as well. This leaves a large, often circular, hole in the cloud.

It is believed that a disruption in the stability of the cloud layer, such as that caused by a passing jet, may induce the domino process of evaporation which creates the hole".

So there you have it - another mystery solved.

Don't forget to get in touch if you see any unusual weather formations and I'll feature them in the blog.

Come on feel the Swn!