Filming in the Samburu desert, Kenya during mating season, cameraman Bob Poole came face-to-face with bull elephants in musth – a heightened state of agitation as they search for a mate. Here he tells the story of one elephant in particular, who the conservation staff named Matt, and why he’ll never see zebras in the same way again…

Being in the presence of Matt the musth bull was totally awe-inspiring.

The first day we saw him in person was amazing. He was resting under the shade of the only tree on a flat plain. I approached him slowly in my Land Rover, making sure not to drive straight at him. At about 50 metres away I stopped to have a good look at him and make my first shot with the camera.

He was in full musth, with a swollen head, his temporal glands sweating heavily, and he was dribbling a constant flow of pungent urine. He was huge and his tusks - one broken, the other long and thick curving inward - gave Matt a kind of extra intense look about him.

He didn’t move much at first, just resting and taking giant breaths, blowing dust around his feet as he exhaled, occasionally flapping his massive ears that slapped against his body. Matt was awesome, even as he stood dozing.

Slowly he leaned forward as if he was preparing to rub his thick skin against the bark of the tree, but his huge head just kept going forward and in an instant he was coming at us in a full charge.

I had just enough time to get the engine going and get way and when it was over my hands were shaking.  Matt had introduced himself to us in a way to make it clear that he was to be respected. 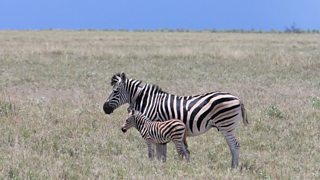 I was also lucky enough to film a population of zebras for the third episode of Nature's Epic Journeys in Botswana, undertaking an exciting, and newly discovered migration - now known as the longest migration of any animal in Africa.

Growing up in Kenya, I’ve seen zebras all my life, but I’ve never really looked at them. It amazed me to learn that I could identify individual zebras in a herd. When you look closely you notice that each of them has a unique pattern on their stripes. Closer observation reveals cuts and scars; many surely from lions.

At first it was hard to tell the males from the females and which individuals belonged to which family, but over time it became easy to recognise. Now I see zebras as individuals who belong to family groups with close ties to each other.

Bob Poole is a cameraman on Nature's Epic Journeys.

The series starts on Wednesday, 11 May at 9pm on BBC One. Each episode will be available to watch in BBC iPlayer for 30 days.