Tudor Monastery Farm: The animals were the stars

I have been friends with my Tudor Monastery Farm co-presenter Peter Ginn since university.

Afterwards we worked together as archaeologists in Hampshire and this friendship laid the foundations, no pun intended, for building the pigsty for the BBC documentary series Victorian Farm.

Little did I know that six years later I would again be responsible for further porcine housing at the monastery farm in West Sussex.

Along with the historian Ruth Goodman, Peter and I took on the work of tenant farmers during the reign of Henry VII, the first Tudor King, using only the tools and resources the farm workers had back in 1500.

As I think back to November in 2007 in Shropshire where the ground was frozen most mornings and it got dark around 4.30pm, it is hard to compare the Victorian Farm experience to the incredible summer we’ve just had this year down in Sussex.

However, as before, the animals were so central to our time on the farm, bringing a range of personalities to complement Peter and myself. And I like to think that our favourite animals reflected who we are.

In Peter’s case he loved the cows (they are docile, sometimes bolshie and like their food) and I on the other hand, was a fan of the horse (Peter thought he was a show-boater), the dog (limited attention span and on occasion hard to control) and the small pigs (ever curious with a tendency to roll around in mud).

The animals were definitely the stars of the show with an instinctive feeling for camera angles and slapstick comedy.

Our cows Gwen and Graceful were given to diva moments whenever they decided they were hungry or bored. 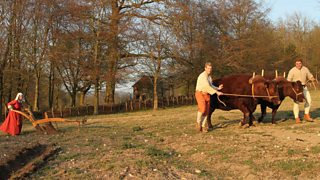 One memorable moment saw them stop in the middle of the museum market place after we had just carried out a difficult turning manoeuvre surrounded by members of the public.

I am not sure whether they were waiting for applause from the aforementioned public but much like a car that has overheated, they refused to move, and Peter and I could do little but stand there for five minutes making small talk until decided they would proceed slowly (but only to stop us looking stupid, not because they wanted to).

Sparky the horse was always well-behaved until there was a photo opportunity and then you better believe he would be vying for centre stage, on one occasion almost knocking me out in his desperation for a headshot alongside myself, Peter and Ruth. 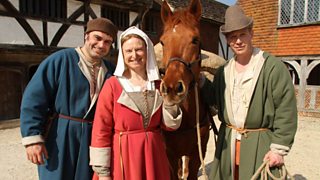 Centre of attention: Peter, Ruth and Tom pose for a photo with Sparky

He also had a tendency to lick my face just before the two of us had a photo together. As I turned to look at him in disgust he would face the camera and there would be a click sound.

Once again, Sparky had cemented his place as the star while I was the bloke facing the wrong way with horse dribble running down the side of his face.

However, I think I can safely say none of us liked the geese.

Least of all Giulia Clark, one of our directors who, while giving us some much needed guidance stepped too close to a goose Peter was holding and was bitten on the arm in a particularly aggressive manner leaving a bruise that lasted several days.

They were cantankerous, camera-shy and above all disinterested in any plans we had for them. 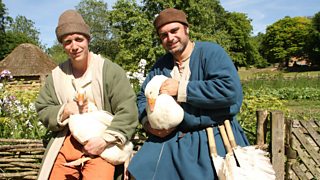 No love lost: Tom and Peter with the grouchy geese, whose feathers were used to make quill pens

Maybe the most pertinent point about keeping animals in Tudor times is that animals were not pets, they were part of the farm team.

If the dog did not earn its keep, it was worthless. I have grown up with dogs and I love them, so it is hard to think of them in such clinical, unforgiving terms.

I can truly say every day on Tudor Monastery Farm was different and challenging, the days were long and busy.

Working with a wide range of contributors added real flavour to our experience.

Consequently, Peter and I, two men in our thirties, could find ourselves getting told off!!

Luckily broad shoulders and a sense of humour can get one through most trials... all in all it was a fantastic time.

Tom Pinfold is an archaeologist and presenter on Tudor Monastery Farm.

Legacy: The score would have to deliver