Mary will be writing a new post each week for her new series, Mary Beard's Ultimate Rome: Empire Without Limit.

It’s a striking fact that if we had been making Mary Beard's Ultimate Rome: Empire Without Limit 40 or 50 years ago, some of the material we focus on in the series simply would not have been discovered. Roman history changes quite fast. That’s partly a question of new excavations.

The wonderful private houses that we visit in Ephesus, Turkey, in episode two have only come to light since the 1960s, and the same is true for a lot of the city of Aphrodisias, also in Turkey, that we feature in episode three.

Hardly any of this was there to see when Mortimer Wheeler made his documentaries about the Roman Empire (pipe in mouth) half a century or so ago. See a selection of his BBC archaeology documentaries in BBC iPlayer. 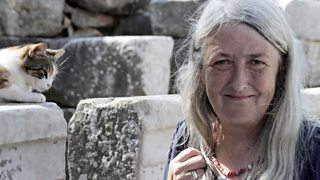 But some of the new discoveries aren’t excavation in the traditional sense of the word. Long before making this programme, I had read about the way the deep bores in the Arctic ice cap were being made, reaching down to ice at Roman levels.

In these you could apparently detect traces of Roman industrial activity (pollution to you and me). I never imagined that I would actually get to see any of this precious ice.

But the team discovered that one of the main centres of this research was in Utrecht, so off we went.

I have rather blotted out of my mind the journey. Getting on a busy train from Amsterdam airport to Utrecht with all the boxes and boxes of kit isn’t a trip I want to repeat (don’t imagine that documentary travel is all arranged by chauffeur driven limo).

But, when we had got ourselves sorted, inside the rather unexciting exterior of the University of Utrecht, there were some very exciting glimpses of the past.

It was in fact a bit like going to Greenland! First of all I had to get togged up in Arctic clothes in order to go into the very large fridge where the cores are kept. The scientists, I was told, go out to get these deep-drilled samples, staying for months in a frozen Arctic camp with no home comforts whatsoever.

Then I got a chance to delve into a smaller fridge, where slices of the Roman samples are kept.

The idea is that the scientists analyse the composition of the tiny air bubbles in these samples (which of course melt as soon as you touch them), looking especially for tell-tale methane, which gives away the scale of the industrial processes making their mark on the environment. There is a striking peak in the first century AD, not matched again for over a thousand years. 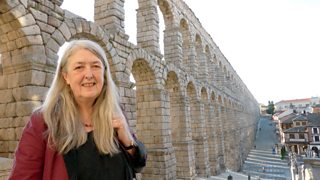 So where did this come from? The answer is from all the Roman Empire’s burning and smelting. And probably at the very heart of it all were the mines and metal works of Spain, where much of the silver that made (among other things) the Roman currency was extracted and processed.

One of the great things about television for me is that you can put these two things together in the same programme. Later on in episode two we go to Spain, and get a rather nasty glimpse of the kind of exploitation that Roman production depended on. What ended up as a methane air bubble in a core of ice started off in the terrible labour of the miners – including one four-year old whose tombstone we see.

The series continues on Wednesday, 4 May at 9pm on BBC Two. Each episode will be available to watch in BBC iPlayer for 30 days after broadcast on TV.

Read Mary's post from episode one: An underwater battlefield

In the Club: Bringing Jasmin’s storyline to life

Russell Kane: I'd like to travel with Jimmy Carr in his exploring shorts