Jimmy's Food Factory opened for business on BBC One last week, and I wonder if you found it hard to believe some of the surprising things I discovered about the food in our shopping trolleys.

Whether you love or loathe the supermarkets they feed the nation. There's a tremendous amount of science that goes into stuff on the supermarket shelves. It's science you wouldn't know anything about just by looking around the aisles.

To understand and unpick all this science, I tried to make the foods myself. I had tonnes of fun doing that during the series.

I loved this bit of kit - the spud cannon had to be my favourite gizmo of the whole series. I used it to slice up potatoes into oven chips. Watch the clip below to see just how well, and fast, it manages to make a spud into a chip - it's the most fun you can have with potatoes.

That experiment is fun but it's also based on what they really do in the chip factories - except they propel their potatoes using high pressure water jets through a lattice of super-sharp blades.

To be honest I wasn't sure it would work. I couldn't imagine that my spud gun would have enough power to force a potato through a slicer and turn it into chips.

But as soon as I fired it for the first time I knew I was onto a winner. I hadn't realised quite how powerful it would be. It had a real kickback and the potato shot out so fast it blasted a hole in the side of the wooden barn wall.

Another favourite of mine was my pedal-powered peanut shelling bike that I used to make peanut butter. Although it looks crazy, it's based on a bit of a real life kit.

In the developing world they use a version of it to shell up to 50 kilos of nuts an hour. It's changed people's lives. Often it's a hand operated machine but using pedal power is much easier. 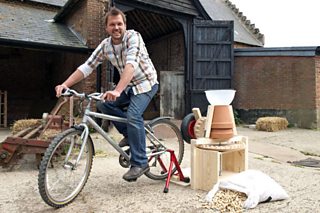 Everything I do in the barn is based on what the factories do, and finding out their secrets but, as you'll have seen, things are a little bit more cobbled together.

Another great design was my squirty cream canister. I used a fire extinguisher for my cream can. It looked the right shape and could withstand loads of pressure - perfect. And it was almost too good.

We don't do any rehearsals with the machines on Food Factory, so we never quite know what's going to happen, and that was exactly the case with squirty cream.

I'd got so much gas into the fire extinguisher that when I pulled the trigger it exploded all over the place and I completely covered the film crew in squirty cream.

Being the pros they are, the camera crew just kept filming even though they were getting covered from top to toe in cream. I thought it was hilarious - I'm not so sure what they thought.

The other great thing about making Food Factory is getting inside the real food factories. It's unbelievable seeing the things we take for granted being made on such a massive scale - and seeing the tricks of the trade for myself.

Factories aren't just about machines, they're also about the people, and I love meeting people with such expertise and passion for their work.

In particular, I really liked going to the tea factory. I love drinking tea (think 15 cups a day is excessive? For me it's normal) and my grandad used to be a tea taster.

It's the tea taster's job to make sure every brew you make tastes the same - that's because your cuppa is made out of loads of different tea leaves.

The way the leaves taste keeps changing depending on where they're grown, the weather, and the soil. The tea taster has to make sure he blends together all those different leaves to get the same taste every time.

What really amazed me was that, even with all the technology we have nowadays, it was all down to one human being and his taste buds to work out what we like in our tea. Amazing. 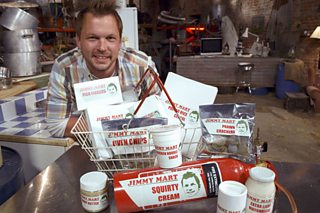 But I guess the highlight of Food Factory has to making my own Jimmy Mart products that actually work.

The thing is, until I taste them I don't really know what they'll be like, as looks can be deceptive. And because my equipment is so rough and ready it can be difficult to refine the taste. So things can end up being either totally overwhelming, or a bit 'so what'?

You might think that sometimes it looks like I don't really want to taste my products - and sometimes you'd be right. All the cameras are up and ready to film the taste test and I'm thinking, 'I don't think I want to eat this after the things I've done to it.'

One of the worst ones this series was chicken Kiev (because I'd pulverised chicken carcasses on a car tyre). It was pretty awful - all the garlicky bit had totally dried out leaving me with a dry chewy wodge.

Chewing gum was a bit dodgy too (the weirdest set of ingredients you can imagine - completely unfood-like). But do you know what? Although I might have lost a filling or two chewing on my gum, it did work - it tasted like chewing gum.

And what made it even better was that the chewing gum experts told us we'd never manage to make it - but we did.

Jimmy Doherty is the presenter of Jimmy's Food Factory.

Jimmy's Food Factory is on BBC One and BBC One HD on Wednesdays at 8pm.