America's Poor Kids: Having a voice

Director Jezza Neumann gave this interview to the BBC TV blog about his upcoming This World documentary, America’s Poor Kids. The programme follows his 2010 BBC One documentary Poor Kids.

How did the experience of being poor compare for the American and British children?
I saw this as an opportunity to show people in the UK that most Americans are decent people struggling just as we are with issues such as poverty, unemployment and the fear of losing everything. In this film I focused on children who had known a better life so they had more things than those I met in the UK for Poor Kids but equally it meant they had the added trauma of losing their pets and their belongings either in storage or pawn shops.

In such a vast country, how did you find the right contributors?
I hired my producer Lauren Mucciolo and the two of us set out on a road trip across America meeting children. We started in New York and New Jersey and then went to San Francisco, Phoenix and Dallas and the outlaying areas of Chicago, which took us to the Quad Cities and the heart of America. We visited schools and after-school clubs, we went to food pantries and family shelters. In all we must have met over 500 kids. We needed to combine articulate kids with some kind of narrative. Often we’d meet great kids but then their parents wouldn’t want to be filmed or for some reason access was lost. The kids we settled on were amongst the most articulate but it was important that their stories complemented each other.

Johnny expresses at the beginning that when you're poor, you don't want people to know. What persuaded him and the other contributors to talk about it on TV?
The opportunity to have a voice. All the kids were intelligent beyond their years and knew that the only way to change things was for people to start speaking out. Johnny told me that he was so empowered by the process that he no longer hides the fact the family are struggling and readily accepted second-hand football gear at the school when it was on offer. This encouraged others to do the same, so then people started to show an interest in what life in shelter was like rather than just teasing him for being in one. 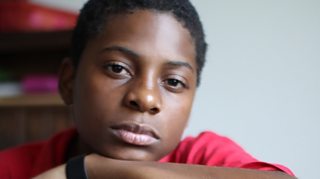 Did you prepare the parents for listening to what their children might say in honesty about them to camera?
Yes, right from the beginning I told the parents and the children that this would only work if the children could say as they felt, openly and honestly. The trust the parents put in Lauren and I was amazing and carried over to the kids who then felt free to speak their minds. Once it was finished I sat with each family and showed them the film and asked them watch it first then judge it after. Each parent was worried about the other families. So Tom and Classie (Johnny's parents) felt that Barbara and Kaylie had it tougher than them and then Sera's mum was worried for Johnny as he was in a shelter and they knew what that was like. They showed concern for each other’s suffering which I thought showed such humility.

Why do Kaylie’s family still keep one of their dogs when they’re made homeless?
Because they were trying to find a home for it rather than taking it to the pound as well. Luckily a family relative took him in.

Would you like to do a follow up documentary with these people in a few years’ time?
I will of course be in contact with these families for quite a while as I am very fond of them all. Whether a follow up is made really depends on what’s happened to the kids and whether by then they are interested in doing such a thing.

'We don't get three meals a day... I'll just think of something else and I'll not be hungry anymore' - Kaylie

Can you give some insight into how parents who are almost starving can also seemingly still be heavy?
The problem is healthy foods such as fruit and vegetables are much more expensive than cheap poor quality food. When you are running to a tight budget, 20 burgers for £1 is a tempting option. Also when you are living in a position where things are spiralling downward, your life is in crisis mode so you are often living a day at a time. Budgeting sensibly or looking for the healthy option is the last thing on your mind when you are about to be evicted or have your utilities cut off.

Which moment of filming touched you most?
When Kaylie was in the garden shed with a tear in her eye, so confused about whether she should spend time with her dog Nala who was about to go to the pound, or her friends she may never see again as she was also about to move to a motel in a different state. I was also torn apart at the pound, not because Kaylie lost Nala so much but more because she tried so very hard to be brave and even make light of the situation by joking about Nala not liking baths. So when her mum said she couldn’t keep the collar and lead and this triggered her to lose it after having been very, very strong, I too shed a tear as I tried to keep the camera steady.

Jezza Neumann is the director of America's Poor Kids.

America's Poor Kids is part of This World on BBC Two at 9pm on Wednesday, 6 March. For further programme times, please see the upcoming broadcasts page.

Some of the charities helping the families in the programme are featured on the information and support page.

Boxing At The Movies: Kings Of The Ring