The 10-step Interceptor guide to being 'badass'

I loved all the action sequences: a lot of running, a lot of fighting and chasing stuff! I’m quite a physical guy - I play a lot of basketball and things like that - so it was a great opportunity for me to do some stunts.

I wasn’t allowed to do some of the most dangerous things, unfortunately, but I did manage to kick someone through a window, my mum was proud… (laughs)

A lot of the stunts I did were done driving, and for some reason they just let me loose! Although it’s funny, ‘cause nowadays cars are kind of set up to not lock their brakes and they’re not supposed to skid and stuff, so actually doing a lot of the stunt moves is quite hard, because cars are so safe nowadays. Damn you, health and safety!

3 Don’t be afraid to get dirty

There is a sequence where I chase a criminal through an industrial plant, and at some point I head-butt him over a bridge, and we fall into a vat of unknown liquid. And we continue to fight in there. That was fun!

We were covered in all of this gunk and everybody was going “Are you OK?”, and I was like "Are you kidding? I’m having the time of my life!”

I think ultimately, as artists, part of our challenge is to find the multitudes within our characters, because I think that’s really what people relate to. Words like good, bad, evil, I think are quite generalised terms which don’t really get to the humanity of people.

5 Don’t be afraid of danger

Ash is also willing to do anything to get the job done, even if it means putting his life in danger, which a lot of our service people do, you know, from the army, from the police. Even people like social workers and teachers put themselves in harm’s way and I think that’s pretty “badass.”

Whenever I see these statues in central London I always think – why isn’t there one of a nurse? If I were to use the term "badass", which I don’t (laughs), then it would be about those people. They are really my heroes. 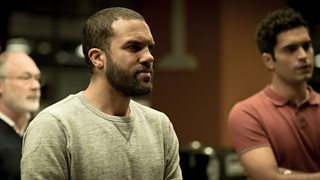 Beards: A must-have for any "badass"

6 But show your caring side too

Don’t hate me for saying this, but number one, I think Ash is a good father, and I think being a good father is pretty "badass".

I think another "badass" thing Ash does is he sports a beard, which, as far as I’m concerned is the only way forward.

8 As does a bit of chemistry

Robert Lonsdale plays Tommy, who is Ash’s partner. It’s amazing when two people have a connection which is based on trust, and I think a lot of times, even if you don’t have a million things in common, you can kind of implicitly trust someone.

You can’t buy or fake chemistry like that between Robert and myself. We were really lucky that when we first met we just clicked, and I think that comes across on screen. 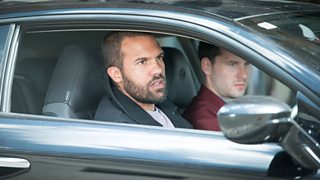 Ash and pal Tommy team up in their battle against crime

One of the issues is that Ash can be a very antagonistic person. It’s problematic when Cartwright (Ewan Stewart) wants Ash to do things by the book – and that isn’t always the way Ash likes to operate. Whereas I think with Kim (Anna Skellern), there’s more of a connection because I think they’re both so obsessed with their work and kind of want to get it done whatever the cost.

10 As for any rookies out there, heed this advice:

The Interceptor starts on Wednesday 10 June at 9pm on BBC One. Each episode will be available in BBC iPlayer for 30 days after broadcast on TV.

O-T’s byline picture is from Who’s In Today? – See other celebrities snapped as they visit the BBC HQ in London.

How we went about keeping the Clangers' old-world charm