I guess there are two ways of approaching a TV production: knowing exactly what you want to say and finding the people who fit into the mould, or telling the story you discover as you go along.

There's always going to be a bit of an overlap, but in the case of Mixed Britannia on BBC Two I'd say it was definitely the latter. 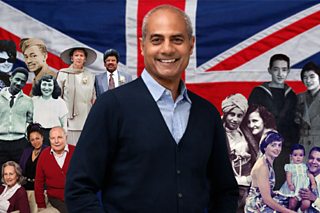 George Alagiah with the families featured in the Mixed Britannia series

The brief from the commissioning editors was to produce a history of mixed race Britain.

It's one thing to research the facts and figures, the dates and so on - but it wasn't until we started filming that I realised we were telling the story of some extraordinary women.

Just imagine what guts it must have taken to defend and persevere with a relationship with a Chinese or Yemeni man as far back as the early 1900s.

These women were ostracised, accused of being prostitutes and publicly rebuked on the streets.

Women like Elizabeth Taylor from South Shields who married the Yemeni seaman, Mohammad Hassan, in the 1920s were heroines.

They were strong women - they had to be - who were adventurous and open-minded.

The one preconception I had about making this series was that I didn't want it to be a whinge-fest about race.

I didn't just want to do programmes about how tough it was to grow up mixed race.

We haven't ducked those issues - you only have to look at episodes two and three about the plight of the so-called "brown babies" after the Second World War, or the poignant and sometimes tragic lives of mixed race children in adoption.

But for me the primary question all three programmes had to answer was slightly different.

What does it say about all of us, the British, that we have ended up in this remarkable place where our mixed race population is growing faster than just about any other comparable country?

Britain was subject to the same pressures and prejudices as America or Germany (the influence of the eugenicists is an example) but we avoided the worst excesses of those countries.

I'm not naÃ¯ve enough to believe this was the result of enlightened politics - there were plenty of bigots here - but I do think there was something unique in the British experience, the history of empire and trade, which meant we took a different approach.

Mixed Britannia is as much a history of Britain as it is a story about those brave people who dared to find fun, friendship, and love across a forbidden frontier.

George Alagiah is the presenter of Mixed Britannia.

Read George Alagiah's views on being mixed race in Britain on the BBC Magazine.

Mixed Britannia is a three-part series on BBC Two starting on Thursday, 6 October at 9pm as part of the Mixed Race Season.

All Roads Lead Home: Teaching my celebrity students the art of natural navigation

Origins Of Us: Studying chimpanzees