Making Chivalry And Betrayal: The Hundred Years War has been a daunting, thrilling and exhausting experience.

We all knew we were taking on a massive topic – those 114 years that saw England and France break apart from one another through a sequence of dramatic battles that would redefine these nations’ histories.

There was so much that drew me to this project, not least that very few people had produced television programmes on it before.

But also, as a cultural historian, I was delighted to be part of something that would hopefully give a multi-dimensional insight into this important era.

I wanted to show, not just the lives of the kings, knights and bishops, the battles, the sieges, the politics, but also the impact it had on the general populations of the countries involved, and on the art, architecture and literature that emanated from it.

It’s a technical quagmire for a TV production, as there are so many different ways to explore the period.

The military history is of paramount importance, but looking through the eyes of the art historian, the literary scholar, the social historian, or the theologian, all adds extra dimensions to better-known events like the battles of Crecy, Poitiers and Agincourt.

On a logistical level, it was challenging for our TV crew to physically move ourselves and our kit between all the locations - battle sites, castles, libraries and churches across the UK and France.

We found ourselves driving for five hours, then setting up at a salient location, trying to get everything first take, then jumping back in the car for another five-hour drive to do the same thing again a few hundred miles away.

It certainly gave me a very real insight into the distances the armies had to march, and if it was hard in a car, it must have been excruciating on foot!

The Hundred Years War is certainly an emotive topic, where national pride and the identities of England and France are called into question.

As a result, the research process was all-important. In just three hours of television we had to make difficult decisions about what we could and couldn’t include.

I know there are some individuals, events and artefacts that simply couldn’t make the cut, but we tried to create a narrative that held together and gave the broadest picture of these formative years.

What’s more, through consulting experts on both sides of the Channel, we tried to create a balanced account that took on board a range of often very differing viewpoints. 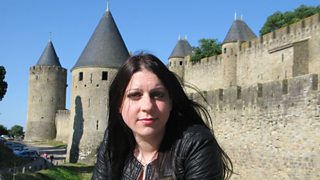 Dr Janina Ramirez at the walls of Carcassonne, southern France

I had so many breathtaking experiences while filming this series.

The most memorable was for episode two, when I was asked to meet the crew at a small church in Suffolk.

I wasn’t told what I would be seeing, and when I met the expert I was told to wait in the nave while they excitedly set up the shot in a separate room.

I was totally shocked when a small door in the wall of the church was opened to reveal the mummified skull of that infamous chancellor and archbishop, killed during the Peasants' Revolt, with his head displayed on Tower Bridge - Simon Sudbury.

'You can feel the texture of the skin through the gloves'

I was shaking as I handled this remarkable survival; I could see the muscles of his cheeks, and the remains of his withered nose. I was further shocked when, on completing the shoot, the vicar told me I’m one of two people who have actually held the skull!

Other great moments came when I was allowed to examine some of the amazing documents and manuscripts of the time.

In particular I got access to the Hengwrt manuscript for episode three; one of the earliest surviving copies of Chaucer’s Canterbury Tales, held in the National Library of Wales.

'Chaucer's pugnacious style came to be seen as quintessentially English'

It was a surprisingly plain manuscript in terms of its decoration, but my blood ran cold when I saw those famous opening lines "Here begins the Tales of Canterbury". For someone with a passion for medieval literature, I really did feel like I was in the presence of greatness.

I take away so many fond memories from making this series. Some of the locations we visited were the stuff of fantasy – Mont Saint Michel, Carcassonne, Saint Denis…

I also had a few hair-raising moments, such as setting off a cannon, before being made to ‘kiss the gunner’s daughter’ – a punishment for firing my first cannon, which luckily did not involve flogging, but did see my face wiped with the filthy, stinky sponge used the clean the powder!

As a team we had to contend with flight paths over Windsor, aggressive ravens at the Tower of London, and 100-feet-high, dilapidated French towers full of dead pigeons.

But it was amazing to get so close to the locations and objects at the heart of this historical period when national identities were born, and our modern society began to emerge.

Dr Janina Ramirez is a historian and the presenter of Chivalry And Betrayal: The Hundred Years War.

Episode two of Chivalry And Betrayal: The Hundred Years War is on Monday, 18 Feburary at 9pm on BBC Four. For further programme times, please see the episode guide.

When Albums Ruled The World: The LP's golden age

The Sound And The Fury: Pioneers of minimal music