Meet The Romans - and not just the toffs

Making Meet The Romans has been one of the most fun things I've ever done.

It's been extraordinarily hard work (don't think making a documentary series is very glam!) but it has let me share some of the things I do in my day job as a Cambridge classics professor with a much wider audience.

So, what do I try to get over to my students?

First that ordinary Romans are just as interesting as the toffs - the generals and emperors - and that there is still loads that we can find out about them.

They really come alive again if you take the trouble to listen to what they have to say.

Secondly that they were in some ways just like us.

I love the story of Allia Potestas, the ex-slave who was living with two blokes - the tombstone says that she was always up first and went to bed last (the woman doing the housework as ever).

And yet in some ways they were utterly different. Just think, for example, of all those communal loos.

That makes the Romans really interesting to try to get to know. 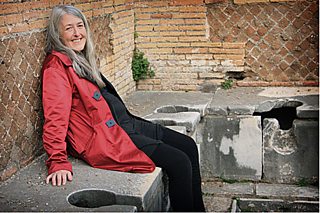 But it also shines the spotlight back on ourselves and on some of the things that we take for granted without much thinking about.

Your average ancient Roman would be gob-smacked for example at the way we separate our children off from the adult world, with their special food and clothes and books.

No turkey twizzlers in ancient Rome (and that's not just because the Romans didn't have turkeys)!

It's almost impossible to pick a favourite bit of the series.

But I don't think I shall ever forget unpacking the almost 100 teeth found in the drain of a dentist's shop in the Forum. Every one had clearly been extracted, and every one was rotten to the core. Just think of the pain.

And the ancient Roman bar-keeper who called himself Calidius Eroticus ('Mr Hot Sex') has made a pretty indelible impression too.

Mary introduces us to a resident of ancient Rome - the baker

And what was I particularly sad didn't in the end make the cut? Again it's hard to say.

But I had really enjoyed going underground to explore Rome's Great Drain (it's still in use and we all had to be togged up in masks and germ-proof outfits).

And I learnt a lot when we actually made up some of the weird potions that the Romans recommended as contraceptives!

Mary Beard is the presenter of Meet The Romans.