I joined Operation Cloud Lab: Secrets Of The Skies as the expedition leader and also as a meteorologist.

The plan was to fly from Florida to California, looking at the science of the skies.

But as well as scientists, there were plenty of other people on the team including three pilots, a ground crew of 14 that followed the airship by road and a full production team including two camera crews.

Not everyone could be on board at once – the airship would never have got off the ground!

But I was really fortunate to spend a lot of time on board and flew most of the way across the continent.

Operation Cloud Lab: Secrets of the Skies takes a fascinating journey into the clouds

Exploring in three dimensions rather than being limited to making observations from the ground was a revelation to me.

The clouds in the tropics around the Gulf of Mexico are huge, and being in the sky with them really brought home the vast scale of the forces at work. 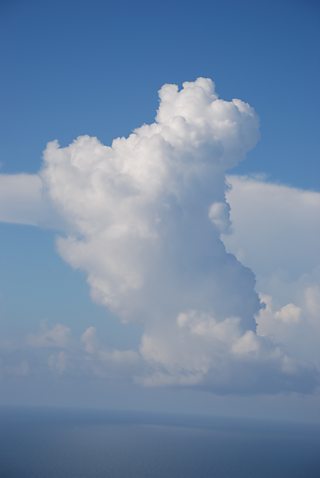 We were able to travel over, under and through these monsters, revealing that clouds are about as far from the popular image of light and fluffy floating puffs of cotton wool as you can get!

They are dense and heavy and full of destructive energy.

I remember looking down at the cloud layer from a plane as a child, and daydreaming about exploring this new world of unknown places, so I was very excited the first time we flew straight through a cloud.

I leaned out of the airship as far as I dared into the heart of a cloud and found that it was a dark, damp mass of floating fog (of course!) – no mysterious worlds – my childhood fantasies were crushed!

The team undertake an ambitous experiment to weigh a cloud. 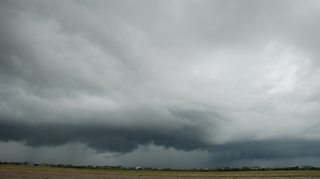 Storm clouds gather over the airfield in Texas

However, as a meteorologist I loved the dramatic weather of southern Texas.

The airship was grounded but the team stood on the airfield watching as powerful squalls passed through. 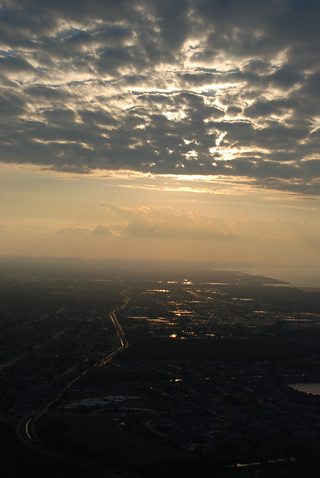 The weather maps showed some of the storm cells begin to circulate, a warning of potential tornadoes.

I was desperate to see a tornado but for the sake of the expedition (and the airship) we were lucky none came too close.

The stormy weather was great for cloud spotting and an opportunity to use some of the wonderful words used in meteorology: cumulonimbus capillatus, altostratus mammatus, crepuscular rays… 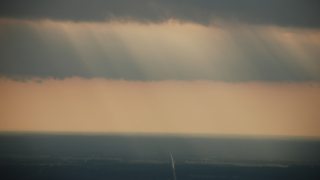 I was looking forward to seeing some awesome lenticular clouds as we flew through the Rocky Mountains – these are smooth rounded clouds that often take on the shape of flying saucers, or stacks of dinner plates.

They are caused by high winds flowing over obstacles such as mountain ranges and after days of looking out for them, we saw the most amazing display in New Mexico.

But it was on the one day we weren’t filming!

Getting over the Rocky Mountains turned out to be one of the most challenging parts of the whole journey.

It was difficult for the airship to gain sufficient altitude to clear the mountains without venting expensive quantities of valuable helium, so we had to shed weight instead.

First we took most of the seats and equipment out of the airship, then the sound man had to get off, followed by the director until eventually it was just me, the cameraman and the pilots!

Luckily we just made it over the top, with a few hundred feet to spare.

Felicity Aston is one of the presenters of Operation Cloud Lab: Secrets Of The Skies

Operation Cloud Lab: Secrets Of The Skies is on Wednesday, 16 July at 8pm on BBC Two and BBC Two HD. For further programmes times please see the episode guide.

Talk To The Animals: Witnessing a chimp apology

Art Of China: My journey of discovery