What Remains: Creating a set as ominous as the crime

As the production designer on a suspense drama like What Remains my job is as much about keeping things hidden as it is about revealing visual clues.

When I first read the script I knew instinctively that the house itself was a pivotal character, as menacing and awkward as its inhabitants, and that I needed to design it to make sure the audience could never quite see the whole picture.

‘When we shut the door then we’re all alone’: Watch a trail for What Remains

All the dark secrets and hidden lives are kept within the confines of its walls, converted into separate flats.

Our job was to trap you, the audience, in the house with a killer.

I knew that we could do this by having full control of the layout and architectural detail of the house and no location would allow us this freedom.

So we built everything as a set in the studio: the staircase, loft and all five flats at Ealing and Wimbledon Studios. I hope we had you fooled. 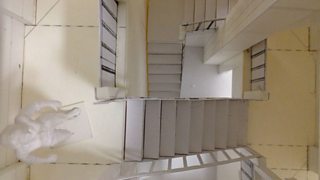 Model for the staircase: A key part of the design process to plan construction and costs

The staircase was designed first as this was the main artery of the house.

It stood 40 foot tall in the studio and whilst the front door matched our real exterior house location in Greenwich, London, the layout of stairs and corridors were entirely our own invention to serve the needs of the script, director and camera.

The characters’ flats were then designed but working within the parameters of budget and schedule only one master flat was built. 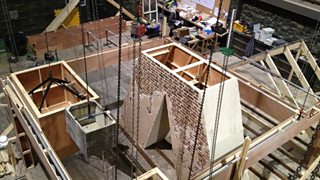 The loft set built alongside the staircase set in Ealing Studios: ‘I hope we had you fooled’

This was a system of movable walls, doors and fireplaces and plug-in windows, kitchens and bathrooms.

We would then have just either 12 or 24 hours, often overnight, to transform one flat into another - changing layout, wall colours and all furnishings and props.

As challenging as this was logistically and to our sleep patterns it meant we retained the identity of the house in every character’s space.

Here’s the reality: a designer’s job is about finding the balance between the visual storytelling and the practical demands of a production - the art and the business. 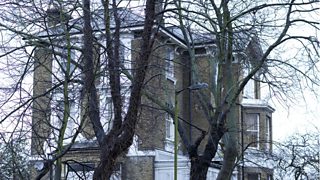 Exterior of the house in Greenwich, London

My biggest influence was Roman Polanski’s Rosemary’s Baby designed by the legendary Richard Sylbert who inspired me to play with architectural detail for emotional effect: up-turned, oversized Victorian mouldings all create much deeper shadows giving the house more dark places to hide.

Not often does a designer get to explore this type of set design on a contemporary TV crime drama, it is more usual to work entirely on location so this was a gift of a job for me.

Coky Giedroyc the director was fully behind my bold ideas and trusted me to experiment. We didn’t play it safe because the story demanded that we shouldn’t.

Her vision for the programme was equally daring so we worked collaboratively to keep pushing each other and yet supporting each other’s approach - the key to a good designer-director relationship.

Lisa Marie Hall is the production designer for What Remains.

What Remains begins on Sunday, 25 August at 9pm on BBC One and BBC One HD. For further programme times please see the episode guide.