The Call Centre: My initiation

When I got the job as a runner on The Call Centre, an observational documentary series set in a Swansea call centre, I admit I had mixed feelings.

Like most people, I had preconceptions about call centres and the type of people who work there.

I envisaged a sterile, soulless place full of disillusioned, miserable, failed young people. I couldn't have been more wrong.

Walking in to the call centre on my first day, I was overwhelmed by the volume of people I was introduced to and the constant noise of people on phones, managers shouting instructions and radios blaring.

It was part of my job to get to know the staff and to gain their trust. After all, we were a huge intrusion into their lives.

Radios were a particular issue for us when we were filming on the sales floor.

Music is an integral part of staff motivation and you can often hear agents singing along or dancing.

Happy people sell: Each new recruit has to sing along with Nev

Without music, the atmosphere on the floor dies and so does the drive to sell.

Unfortunately it was the duty of the runners to turn the radios off when there was filming in the vicinity - much to the disgust of some of the team leaders and agents.

It surprised me to find that very few people were unhappy working at the call centre.

Nev - the CEO of the company - even went as far as to instigate a game of egg roulette and a bean eating competition to determine the winner of a sales battle, which incidentally happens to be one of my filming highlights.

I've never been in an environment where the CEO of the company knows most of the staff by name and gets so involved in their working and personal lives to ensure they perform.

His eccentric ways even extended to the production crew, who after months of filming, felt like part of the family.

I, as well as the other runners and even the producers were often subjected to his maverick ways. 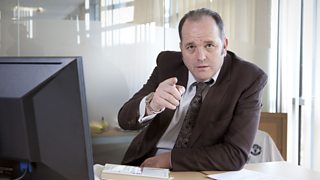 Nev sums up his management style: 'Probably Napoleon. Dictator, but his troops loved him'

On one occasion when I took Nev a cup of tea, after thanking me profusely, he jumped on his desk and screamed "GET OUT OF MY OFFICE, NOW!!!" - in full view of a floor of laughing sales agents.

I was embarrassed, but it was something we witnessed and filmed him doing on a regular basis to the staff and it was eventually seen as an initiation ritual amongst the crew.

The Call Centre was a production like no other that I have worked on. I spent the majority of the time in fits of giggles. It has changed my opinion of call centres.

This one nurtures and cares for hardworking people who face constant abuse from the public, and it will definitely make me think twice about the person on the other end of the line the next time I get a call.

Angharad Evans is a runner on The Call Centre.

The Coronation of Queen Elizabeth II: Restoring an era

Operation Snow Tiger: A rare glimpse into the wild