Patagonia: Had the pumas attacked, we would have been done for

Patagonia is one of those places that has a mysterious draw. The sheer scale and drama of the landscape is breath-taking.

The lords of this uncompromising wilderness are the pumas, and for me it was the shoot of a lifetime. In most locations, a glimpse of a puma is all you can hope for, but in Torres del Paine National Park there is a real chance of capturing detailed wild behaviour.

The BBC had filmed there before, so I gained all the tips and advice on offer and got in touch with a respected puma tracker: Rodrigo Moraga. His view was that to film pumas hunting guanaco was ambitious, but possible. It needed time in the mountains and a lot of luck, since pumas hunt mostly at night. We would be on foot with Patagonia's top predators, which do very rarely attack humans. Tricky! 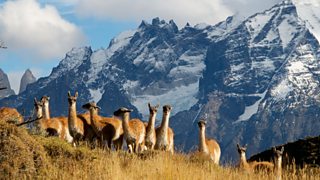 We believe the only successful filming of a wild puma hunt in Patagonia is by a park ranger – Heriberto Yaeger Hernandez on his handi-cam. Heriberto has the huge advantage that he lives and works in a small ranger station in the heart of puma country.

But for the Patagonia: Earth's Secret Paradise series we would have one trip, one chance, trying to film something that no other professional crew had done with bulky ultra-high definition cameras. Were we crazy? 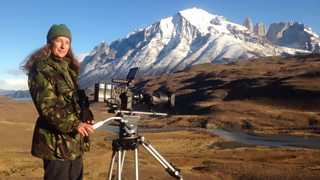 Each day, I started early with Rodrigo. At the cusp of dawn we drove out looking for pumas, fresh kills, or circling condors. We walked miles through puma country, but it took me several days to get my eye in and even see the pumas Rodrigo pointed out. None were hunting or even stalking. There were few kills to give us any leads. Our task seemed daunting.

We tried instead to find a den with new cubs. Rodrigo walked the rocky fringe of a lake where pumas had had dens in previous years. I sat on a high-point hoping to see the female walking home. Somehow when I was with Rodrigo I felt safe, but sitting alone on a windswept hill hoping a puma would walk by – a kilometre from the nearest vehicle - I had hours and hours to imagine she was watching me as keenly as I was looking for her.

More than once I felt that sixth sense that something was behind me – but I never saw her.

Only later on did we film her favourite lookout, which was about 100m above where I had sat for two days. But this wary female did let us film her and her three gorgeous, six-week-old cubs playing at their den. To see the cubs, even if just through binoculars was a real thrill, and a good start. 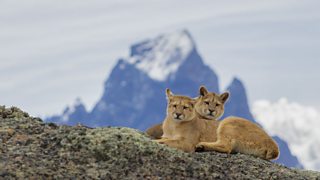 After two days we left them in peace and returned to our mission to film a puma hunt, in particular two young puma sisters who Rodrigo had known as cubs. He told me these pumas, now teenagers, were more tolerant of people.

Several times Rodrigo was able to spot them and we would track them, on foot, keeping our distance, carrying our kit, filming when we could. It was totally exhilarating, being in such a wild place with two pumas, letting us walk alongside them.

At times they would wander towards us. I know the rule is DO NOT RUN, but your adrenaline is pumping.

More than once they approached within a few metres, and had they attacked we would have been done for. But happily their body language was relaxed and it was broad daylight. The worst that happened to me was that I was ridiculed by the team, as I subtly shifted behind the camera as the pumas got close. 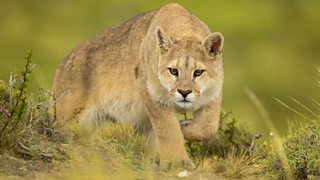 One was tailless – a defect Rodrigo believes is since birth. She was more playful, cheekier, pushing boundaries. But her sister was definitely a predator, and locked me with her cold eyes. I wouldn’t have liked to meet her at dusk, on foot, alone - then the outcome would have been very different.

By working with the experts we were slowly able to film the two sisters taking steps towards independence, and those precious days walking with pumas will stay with me always.

So did we catch a hunt? You’ll have to watch to find out…

Patagonia: Earth's Secret Paradise starts on Friday, 25 September at 9pm on BBC Two. Each episode will be available in BBC iPlayer for 30 days after broadcast on TV.