By total coincidence, I live in Southern Sweden, about half an hour down the road from Ystad, the small coastal town where Wallander is filmed and set.

I'm one of those jammy sods who managed to entice a Swedish girl into marriage and then paid the price by being made to emigrate to a well-maintained, socially progressive, sensible-thinking paradise. With sunny summers.

I was already considering myself ridiculously lucky when I was rung up in 2009 and asked whether I'd consider taking over writing duties on the series.

I was overjoyed, in a very non-Wallander kind of way: and I can safely say that I've relished every moment of this job, working on my own doorstep with an unbeatable team, and adapting a series of books that I've loved since my Swedish father-in-law gave me Before The Frost (film number three in the new series) 10 years ago.

Watch the trailer for series three

For those of you coming to it afresh, Wallander is about a middle-aged Swedish detective working the badlands of SkÃ¥ne county - which lies just over the sea bridge from Denmark and the rest of Europe - and dealing with often horrific crimes that seem to belie the social democratic paradise that I mentioned above, belief in which is a key part of Swedish national identity.

I suppose the series is known for a certain melancholy of tone; for its striking - and I think, exquisitely beautiful - visuals; and, perhaps most of all, for a towering central performance from Kenneth Branagh (now, of course, Sir Ken) in the role of Kurt Wallander.

It's also the series that seemed to kick off the craze for what's now called Nordic noir in the UK: a genre which encompasses the novels of Mankell, Stieg Larsson, Jo NesbÃ¸ and Camilla LÃ¤ckberg (amongst many others); the Millennium films; and the gripping TV shows, The Killing, Borgen and The Bridge.

I don't think it's hard to see what appeals to British audiences about Scandinavian crime fiction.

It tends to be very well written, tightly plotted and characterised, and extremely exciting.

It also tends to be about something: some social issue, some questioning of why these terrible things happen, which, without overpowering the stories, gives them a depth and meaning often lacking in other crime genres.

But, perhaps most importantly, it has a very particular atmosphere: of wide open, beautiful but bleak landscapes; of deep snow and long winters; of contemplation and (that word again) melancholy.

An enjoyable kind of sadness that supposedly permeates the Scandinavian mentality.

When I sat down to write the new series, one of the things I wanted to do was to give Kurt a bit of an easier time, to move away a little from the sadness that seemed to be inherent in the tone of the series.

Previously, Wallander has invariably been hurt and disappointed by his personal life and disturbed and damaged by the things he saw in his professional life.

I thought it was about time to give him a break, to make him happy; and I'm pleased to report that this happens in the first of the new series, An Event In Autumn.

An Event In Autumn: 'You know you're dreaming... you've got nothing'

It happens for about 10 minutes. Then Fate, despite all my best intentions, unleashes a proverbial bucketful on him.

In fact, although I tried hard to reinvent Wallander as Mr Cheerful, An Event in Autumn is probably the bleakest Wallander yet.

Happiness in Wallander is like Winter sun, greatly appreciated but essentially fleeting: Kenneth Branagh would write REMEMBER TO SMILE in large letters on the script of episode one on those few occasions when the story allowed him to do so.

Perhaps Henning Mankell is to blame.

After all, he's the wise and wonderful man who came up with the character of Wallander and wrote the short story upon which An Event in Autumn is based. He's the godfather of this genre.

However, he's such a kind and warm person and has been such a tremendous inspiration and joy to collaborate with that I can't find it in my heart to blame him for anything.

I guess I've come to realise that the melancholy, the disappointment and the difficulty are part of what make Kurt Wallander who he is, whoever is writing him: he can't help but be affected by the things he sees in his working life, and he can't help but take them home with him. 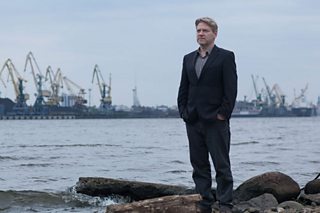 During that first episode, he protests that he's basically a cheerful person, but also realises that he can't do what he does, he can't see the things he sees, and not end up the way he is.

I think that's probably true of a lot of real-life detectives.

However, I don't want to give a misleading impression: it's not all rain.

An Event in Autumn is just one of three films, and as we've seen, there are smiles and even a couple of jokes in it.

Although my favourite joke, which involved the hunt for Osama Bin Laden, had to be cut for reasons of him being found.

Anyway, the new series takes place over a long time. We begin in winter, move to summer (and to Riga) for episode two, and pick Kurt up again in late autumn.

And although his new beginning goes wrong for him, Kurt's already on a journey out of depression and drink; he's much more resilient and emotionally open than once he was; essentially, he's grown up a bit.

So I'm pleased to report that he does end on an optimistic note, with the chance of happiness coming from a place he didn't expect.

Series Four, however, might well be a different matter...

Peter Harness is the screen writer on series three of Wallander. Peter worked closely with Henning Mankell, author of the original Wallander novels, on these three feature-length films.

The first is An Event In Autumn, which is on Sunday, 8 July at 9pm on BBC One. For further programme times, please see the episode guide.

Henry IV and Henry V: Q&A with the costume designer

Volcano Live: Why I changed my day job for volcanology