The Lady Vanishes: Cramming a film crew into a train

Just below my temporary office in sunny Budapest, a Hungarian construction team are building a train. Not just any old train, but a beautiful reconstruction of 1900s corridors, compartments and a dining car.

We are preparing to shoot the BBC One version of The Lady Vanishes, which Hitchcock made famous in his 1938 film.

Most of the action is set on a moving train, from which the unassuming Miss Froy 'vanishes', provoking the irritating and self-centred Iris to put herself on the line to find her, foil a plot and redeem herself. 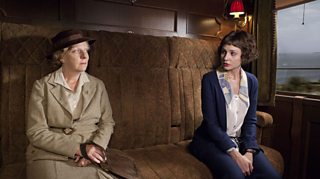 'She was sitting right here': Miss Froy and Iris Carr

Sometime later, I stand in the finished set and am awestruck by the superb skill and attention to detail that our carpenters, painters and set decorators have delivered.

I then remind myself that it was me, the director, and my designer who insisted the dimensions be virtually no bigger than the real thing - and that was cramped! 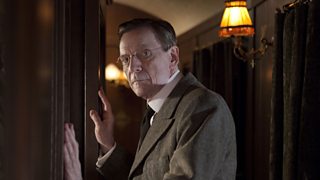 The Doctor (Jesper Christensen) in a reconstructed carriage corridor

Outside hang the huge green screens which, by the wizardry of computer-generated imagery, will enable suitable backgrounds, which we have previously shot on the Croatian coast, to appear to whizz by with complete credibility.

Now for me it is a toss up which to be more anxious about: creating the necessary illusions and drama in this wonderful tight space, or following in the footsteps of Hitch!!

Iris meets Max for the first time aboard the train

Fast forward a little more and the illusions are a joy in themselves. Light effects flash past, curtains sway gently on hidden wires, even the actors have been schooled to never quite stand still; think trying to carry two cups of coffee down a modern express train without spillage and you’ll have the idea.

We have even mastered the problem of squeezing several actors, sound recordists and a hand-held camera down the corridors all at the same time without the equivalent of a motorway pile-up.

I hope you’ll enjoy the result. If you should wonder whether this director makes a very fleeting appearance himself as Hitch used to; well yes, of course - it would be rude not to!

Diarmuid Lawrence is the director of The Lady Vanishes.

In The Flesh: My Diary