If you had been in our office a few months ago you may have been slightly bewildered by the excitement that greeted our postman.

Never before has the delivery of a letter caused such a stir.

The letter he brought was swiftly passed round everyone and drew many admiring glances.

You would think we had never received a letter in a handwritten envelope before, and for most of us in a work capacity these days that is true.

But it wasn't a celebration of days gone by that caused this excitement, but that Sir David Attenborough was the writer. 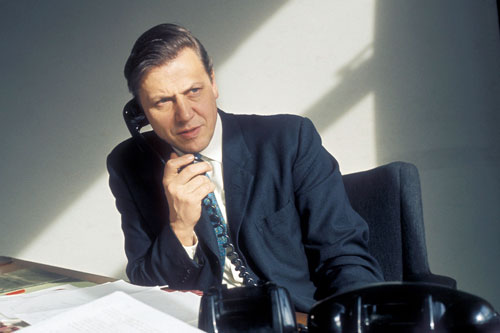 Sir David Attenborough on the phone, not email, in 1972

Sir David doesn't use email so working with him to develop BBC Four's collection David Attenborough - The Early Years involved the unique experience of receiving his letter at my office desk.

As the editor of BBC Four's Collections it's my role to find hidden gems in the BBC archive.

Programmes contained in these collections are permanently available to watch in full in BBC iPlayer as part of the BBC Four Collections. They never expire.

With Attenborough's Early Years, you'll see it's not just full length archive programmes, but also letters, internal memos and photographs which make up this unique collection.

So how did I go about selecting what to finally include?

David meets a frill lizard in Quest Under Capricorn, Bush Walkabout from 1963

BBC archive programmes are searchable in an online database. You order DVD copies of everything that sounds promising and start viewing.

With a wealth of material to choose from, we arrived at a list of 30 programmes.

They range from 1955 to 1969 and beautifully illustrate Sir David's early career including his first explorations abroad and first time presenting live in a studio.

The earliest programme in the collection is Zoo Quest To West Africa.

It was during the making of this series that David stepped in front of the camera, thus starting a hugely prolific and successful broadcasting career.

It was quite a bumpy start.

As I read in his book Life On Air, David came across a note from a BBC executive at the time who said of him: "David Attenborough is intelligent and promising and may well be producer material, but he is not to be used again as an interviewer. His teeth are too big."

The collection also captures the evolution of natural history programming and filming practices.

These programmes are amongst the first to be predominantly set on location, which was a significant turning point in the filming of animals.

As Sir David explains in a personal introduction that accompanies the programmes, animal programmes used to be entirely filmed in a studio and "consisted of an expert from London Zoo who brought animals from Regent's Park and exhibited them live in the studio, usually on a table covered by a doormat.

"He talked about them while they struggled to escape from the glare of the studio lights, occasionally wet down his front, bit him - or even escaped."

Attitudes to wildlife were so very different in the 50s that the premise of some of the early programmes can seem a little unsettling now.

Once captured, the animals would have to accompany David on his travels, so feeding and caring duties became part of the editorial of the programme.

Creating the collection made me nostalgic for a time I've never experienced.

In the 1950s much of the wildlife of the planet was un-filmed, even unknown. Trips were largely exploratory and communication back to London was via letters and telegrams.

This led to some treacherous journeys, as David recalls in this Zoo Quest For A Dragon clip.

Having received a beautifully written letter from Sir David myself, I decided that the best way to capture these behind-the-scenes trials and tribulations is through his own communications from that time.

And so I went to the BBC Written Archive in Reading, a fascinating place with four and a half miles of shelving containing millions of documents created as part of the BBC's daily operations.

I spent a few days immersed in old production files selecting documents for inclusion in the collection.

I mentioned to the archivists that it was quite ironic sitting here reading letters from Sir David whilst I myself had also received a letter from him.

I made a joke about framing my letter and was swiftly told that any letters David wrote to me are property of the BBC too, and should be handed over to the archive.

So as I wait for my next Attenborough letter to arrive I wonder whether I could still frame it and give the archive a photocopy. Probably not.

Sandra Gorel is the editorial executive for BBC Four Collections.

David Attenborough - The Early Years is available to watch in BBC iPlayer as part of the BBC Four Collections.

Alongside the Collection, Attenborough: 60 Years In The Wild is a three-part series on BBC Two in which Sir David looks back over his career in natural history. Episode one is available in iPlayer until Friday, 7 December.