Volcano Live: Why I changed my day job for volcanology

So, what makes a middle-aged office worker up-sticks, give up seven years of her life to return to university as a mouldy-oldie student, travel half-way across the world to go and see volcanoes in the middle of nowhere and pursue a career trying to fathom out how the rocks of this planet formed?

I used to be a contracts manager in a telecoms infrastructure company - a good job but not one which really got me fired up.

If someone had told me then that 10 years in the future I would be working at the British Geological Survey as a mineralogist and petrologist (ie I look at crystals and minerals in rocks and determine their origin and history), that I would be involved with the BBC's Volcano Live series and that I would have witnessed first-hand an amazing eruption... I would never have believed them.

In my early thirties I travelled to Antarctica where I met the late Jon Stephenson who had been the geologist in the 1957 Commonwealth Trans-Antarctic Expedition. His passion for his subject made a lasting impression.

Following redundancy I was accepted at Durham University to study geology full-time (a brilliant experience!).

I fell in love with all things volcanic - particularly igneous rocks under a microscope.
Igneous rocks are those which have formed from magma (molten rock). They can form from lava flows such as basalt or can crystallise and cool before they reach the surface such as granites (intrusive).

I found that tiny crystals in the rocks hide a myriad of secrets - some can tell you what the pre-eruptive temperature of the magma was, whether there have been changes in the magma chamber during their lifetime or how long they have existed before being erupted.

I learned about different types of volcanoes and eruptions while nurturing a dream that one day I would see an eruption for myself.

After my PhD at Bristol University on the magmatic history of a volcano in Afar, Ethiopia, I decided to visit the largest lava lake in the world, Nyiragongo, in the Congo.
This is a unique volcano, one of only a few in the world which has a long-lived lake of molten lava in its crater.

Nyiragongo is also special as it has a very low silica content which makes its lava very runny. I hoped to bring back samples of historical lava flows.

Going to these remote places is not possible for everyone and so the BBC asked me to film this trip for Volcano Live. 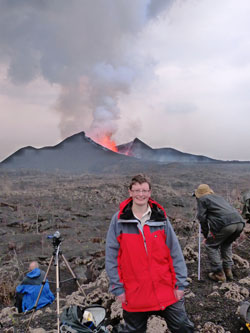 Filming was exciting but I was also a little apprehensive as I didn't know what we were going to see - this was new territory for me.

I really wanted to get some good footage to be able to share the experience.

The Congo unfortunately has had a difficult recent history and can be a tricky place to visit, although the Virunga Park Rangers do a tremendous job in trying to make the area safe for both humans and wildlife.

Common sense planning means checking for updates on the safety situation before travelling, taking the minimum of stuff with you and preparing as much as possible.

The easiest way to get into the Congo is to go as part of a travel group. I went with a diverse German-speaking group who had one thing in common: they were all regular travellers with a passion for volcanoes, and were very understanding about my complete lack of German!

We knew that Nyiragongo's sister volcano Nyamuragira had begun erupting a couple of months before our visit but had no idea what the current state of play was.

A few days before we left for the Congo Nasa published a satellite image suggesting there was still some activity.

We took a chance and trekked to the eruption site through the rain forest. That first view of the active volcano, after emerging from the dense rain-forest was magical!

Seeing a volcano in full-eruptive state is an assault on the senses which is impossible to describe. The noise is incredible. We could feel the heat, despite being around 550m away. And the blood red lava shooting 200m into the air was mesmerising.

All the textbook theory was coming to life and we knew we were watching something very special: a once-in-a-lifetime experience. And I collected some great samples!

Kate Humble sees Eyjafjallajökull from above

When I've told people that I was studying volcanoes they have often pointed out that there are no active volcanoes in the UK. This is true. But we have had: our granite tors are a legacy left by our volcanic past.

We can also be affected by active volcanoes in other countries as we were in 2010 when Eyjafjallajӧkull erupted - 'THAT Icelandic volcano'.

We need to study volcanoes, both active and extinct, in order to work out what makes them tick.

Volcanoes are like people: each has its own unique personality.

I consider myself very lucky to have been able to change careers and fulfil a dream. It was hard work, but worth it. My advice to anyone considering doing the same is to believe in yourself and go do it!

Lorraine Field is a volcanologist on Volcano Live.

Share your images and send your questions for the presenters and experts on Volcano Live. You can read the executive producer's story on the About The BBC blog on the making of the series.