Is Football Racist? My Dad's story

It's not an exaggeration! Here I am, 32 years of age, I've been a professional footballer for half of my life yet I've never talked to my Dad about his days within the game.

The truth is I'm kind of glad that I hadn't.

My dad left school with the dream of being a footballer but only managed to play at semi-professional level at his peak, despite his widely acknowledged ability.

It was his experiences as a black player in the Preston and District leagues that alarmed me.

When BBC Three approached me to present Is Football Racist? I thought it would be a perfect opportunity to gain a real understanding about this very emotive issue, one that I regularly speak about in my capacity at the Professional Footballers' Association. 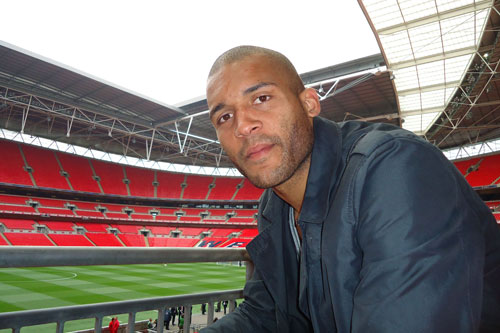 I expected to hear some differing experiences to my own but not really anything to challenge my personal beliefs around the issue.

In making the documentary I asked my Dad for the first time about his experience of football culture in the 70s and 80s.

The emotions it brought up on camera took us both by surprise.

"Kicked, punched, head-butted, stamped on", and that was ON the pitch. My Dad could barely bring himself to recall the details of events OFF the pitch.

He kept going back every week, to the terraces and to the pitch, because he loves football, but I'm not sure I would've been the same.

Maybe it's because of the different eras. Dad was used to the abuse and prejudice in daily life so it wasn't unusual for him. Why should it be any different at the football?

Despite our shared passion for football Dad decided never to take me to a game when I was a kid. He didn't want me to be in that atmosphere in the stands.

I've grown up in a different time and if I encountered now any of what he experienced then I'd be horrified.

I often wonder if I'd love the game as much if I had known Dad's story. The truth is that I probably would.

Once the conversation got going we went on to talk about how much he wanted to be a footballer, what it would've meant. Of how Viv Anderson playing for England was a real "wow" moment, not just for him but for the black man in England.

So when we reflected on what it meant to us for me to pull on an England shirt we both broke down! The realisation of a dream for father and son.

Dad consciously sheltered me from what he knew was out there, he'd experienced it first-hand. I appreciate him doing that because it gave me the freedom to pursue goals without pre-conceived fears of 'potential' barriers.

I will do the same for my kids too. I don't want to burden them with what 'might' be a problem in life. I want to empower them. I want them to believe that they can achieve anything if they work hard enough, not program them to see barriers.

Making this film has helped me to see football's problem: it's made up of humans.

Football is no different to society. It's comprised of young men from local estates up and down the country.

Football can, however, lead the way by setting an example that is watched by hundreds of millions of people across all ages, faiths and cultures on a weekly basis.

Its influence is unparalleled.

Clarke Carlisle is the presenter of Is Football Racist?

Is Football Racist? is on Monday, 16 July at 9pm on BBC Three. For further programme times, please see the episode guide.