Henry IV and Henry V: Q&A with the costume designer

The Hollow Crown is a series of four adaptations of Shakespeare's History Plays on BBC Two starting with Richard II. Annie Symons is the costume designer on the three continuing films: Henry IV Part 1, Henry IV Part 2 and Henry V. Annie talked to me about the creative and practical process of clothing the cast.

How do you research the costumes for these three films?

I started seven or eight weeks before filming. Normally it's shorter but this needed a lot of prep.

Paintings are critical for research. It's not just a literal view of what people wore. I look for other information - feel, colour, sense, something that will unlock the ideas.

In this case there are relatively few paintings from the early 15th Century so I looked at artefacts, I went to buildings, I tried to understand what it was like to live in those days.

We looked at war films and thought about what it was like to be a soldier. We wanted to appeal to a war film audience, to contemporise it and strip out all the pageantry and pare things down.

I looked at football hooligans, the way they move and wear colours. We thought about war as sport which it definitively was in the age of chivalry.

We decided they were football teams and Alan MacDonald and I chose dark congealed bloods for England and beautiful blues, whites and golds for France. It's very subtle and I think the way it is graded looks incredibly beautiful. It is perceptible but it's not in your face.

How much creative freedom do you get?

Richard Eyre and Thea Sharrock are theatre directors so they are used to working in a way which is different to TV. Conceptually you build things together. It's a much slower development and I love that. I'm interested in colours and concepts and literally the big picture and how it all fits together. So I was in heaven really.

There is a lot of fighting in armour, how do you accommodate this?

Flexibility is critical as it's basically an action film. Tom Hiddleston is an action hero and the fights are extreme physical endurance, we honed those costumes like building a second skin. 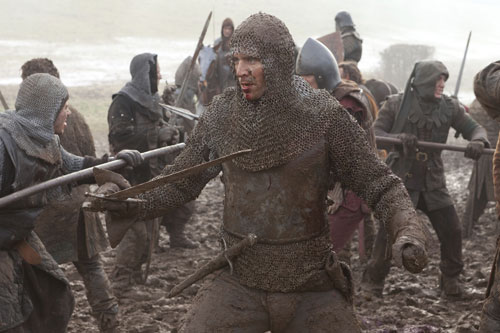 We made his armour out of rubber and he was sewn into things at times. It was precisely fitted so he could move and look sexy because he's got an amazing physique. It's like working with a finely tuned instrument and you work very hard to get it right.

The French had to look particularly shiny and scary and mannered but for the English we stripped the armour away for some characters and just put little bits on so you got a sense of metal.

Do the actors have input?

Yes, that's part of the process. It was a big journey for Tom, from playing Prince Hal to Henry V. Doing Agincourt felt like we were going to climb Everest. We had lots of fittings and chucked things around.

Some actors are quite happy to put on what you give them, but it can inform their performance and certainly what they say informs you as the designer.

Jeremy Irons is extraordinary in costume and that was a very interesting journey. The first thing he said was "I want this to be real."

We chose clothes that looked like they belonged to him, very old things. He had to look frail yet majestic, so he wears this enormous overwhelming fur coat and this sort of bobble hat with no bobble.

He told me they invented bobble hats to keep the helmets up because they were incredibly uncomfortable. Also old men cover their heads because they get cold. All these elements grew out of fittings. 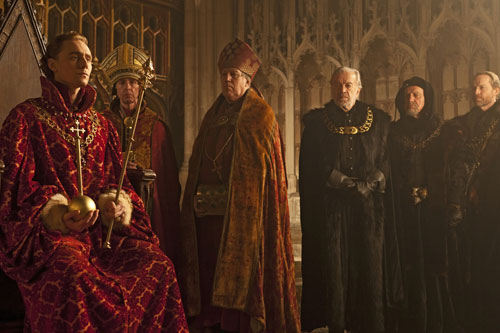 The transformation: Henry V is crowned

It's a huge cast, how did you clothe them all?

We ran! It was a huge physical and logistical feat.

I chose a look and we stuck to it, particularly in Henry IV. Richard wanted the whole of Westminster to look like men in suits so we put nearly everybody in black and all you see is the face.

Also we very deliberately put everybody in leather trousers. Because they are in the rain we could wipe them clean so they only needed one pair. It gave them a masculinity and a sexuality and a warrior-likeness. Even for the older men - it changes their performance making them virile and vital.

We shot Henry V first. So we re-dyed the armies in-between Henry V and Henry IV from pale blue into dark bluey green.

There is a lot of mud, how did you cope?

The mud is an entity in itself. It's very heavy and it wrecks clothes so in between shooting days we had to hose things down to try and preserve them.

We worked in tents with blow dryers going and as a lot of the costumes are hired we spent a month cleaning and restoring them. 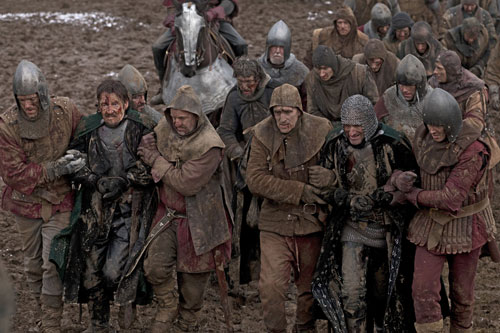 What got you into costume design?

I think it's been hardwired in me since I was tiny. I started making costumes for my dolls from watching BBC dramas. I remember watching Glenda Jackson in Elizabeth R and being completely amazed.

Then I started making clothes for school plays and working in the local theatre. I couldn't quite believe that if you drew something it could then become three-dimensional and real.

I just thought that it was magic, and I still do which is just as well when you're working 18 hour days in the mud! I'm thrilled to bits to be doing it and I think that's what gets me up at four in the morning!

Eliza Kessler is the researcher on the BBC TV blog.

Henry IV Part 1 was originally scheduled for Saturday, 7 July at 9pm on BBC Two and BBC HD. Due to extended Wimbledon coverage it was actually broadcast at the later time of 10pm, and was repeated on BBC Four on Sunday 8 July at 9pm.

The films are part of Shakespeare Unlocked and the 2012 Festival.