We covered a vast area and huge distances while filming Indian Ocean.

Starting in South Africa we travelled up the east coast of the continent, then around India and back down through Indonesia to finish in south-west Australia. 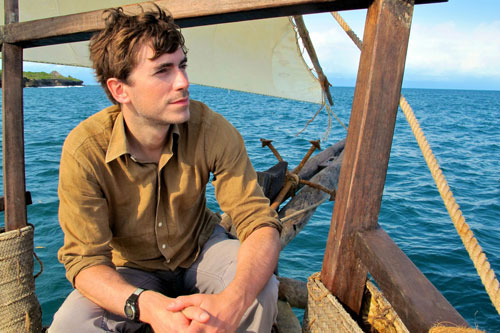 We visited 16 countries in all and spent more than six months filming, putting in some serious miles on the road.

The immediate image that people have of the Indian Ocean is tropical islands but of course it's a much larger area than just the beautiful parts.

It's the third largest ocean on the planet and a home to the paradise islands of countries like the Seychelles but also Somalia which is one of the most difficult and dangerous places to film, as well as desperately poor countries such as Bangladesh.

It's a region with a complete mix of life and we tried to reflect that in the series.

I'm the presenter and also closely involved in all aspects of the shows from initially coming up with the idea through to helping to decide what we film, then editing, scripting and voiceovers.

We're a small team and I loved the whole process of discussion - and occasionally heated debate - as we decided what we were going to film and where we would visit during our travels.

We couldn't visit every country around the edge of the ocean and we certainly couldn't travel every mile of the coastline so we had to pick the best spots for filming based on the likelihood of us actually being able to tell a story, show an issue or see a stunning sight.

It largely comes down to probability. The question we ask is how likely are we to be able to get to a place, see what we need to film to tell a story and then get out again without vast expense?

The end result is TV with a blend of travel, current affairs, wildlife, history, culture, global issues, local concerns and of course, some weird food.

You've got to have some strange food on a journey like this.

On the road the other team members were drawn from a small but brilliant pool.

Four of us went out from the UK and there was a slightly different team for each leg of the journey.

I also had two of the best cameramen in the business, Jonathan Young and Craig Hastings who each filmed around half of the series.

They have a remarkable talent for capturing stunning footage, spontaneous encounters and tricky situations.

And remember they do everything I do, often going backwards and carrying more than 12kg on their shoulder.

Together we were privileged to visit some of the most glorious islands in the world while filming this series and one personal highlight for me was meeting Brendon Grimshaw, an 86-year-old Brit on the island he bought in the Seychelles in the 1960s for £8,000.

He's been living the dream in paradise ever since.

But for the third programme in the series we travelled to Mogadishu in Somalia, one of the most dangerous places on the planet, where we needed flak jackets, helmets and even 'blast boxers' - armoured underwear - to protect us against IEDs and grenade attacks.

Watch Simon on a mission with AMISOM soldiers in Mogadishu

We had Ugandan peacekeepers from the African Union Mission In Somalia (AMISOM) looking after us and they took us to the frontline several times during active combat.

Their organisation is battling to stabilise Somalia and halt piracy and it's a frightening and tragic place.

Producer-director Andrew Carter, cameraman Jonathan Young and I were the small team.

We've all had extensive experience of similar situations and completed Hostile Environment courses where you're taught the essentials of survival.

But when you're there the main thing you think about is getting the story on film.

That's the whole point of a series like this: to show viewers what life is like in these remote parts of the world.

Simon Reeve is the presenter of Indian Ocean.

Indian Ocean continues on Sunday, 13 May at 8pm on BBC Two and BBC HD (except for analogue viewers in Northern Ireland and Wales). The series will be available to watch in iPlayer until Sunday, 10 June.