I'm writing this blog post in London remembering the last time I was in such warm sunshine. It was during a break in filming and I was enjoying a coffee in the Luv Café in Govan Road, Glasgow last September!

Outside sunlit rows of brown sandstone tenements stretch away to the BAE shipyard and Fairfields with its memories of men pouring out of the great gates in the days when they built the liners here. History all around us. 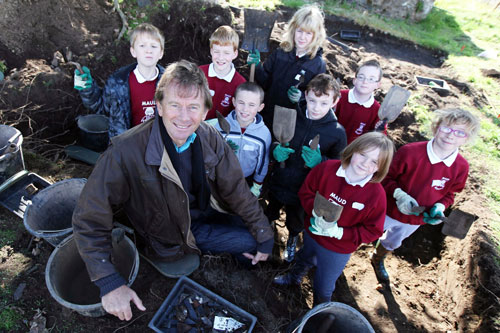 Beyond the yards the soaring Victorian Gothic turrets of Govan Old Church, which stands on a site sacred since prehistory, is home to Britain's most amazing collection of Dark Age carved stones.

It's typical of The Great British Story: layers of the past everywhere.

Nowhere in the UK, I suspect, is there a landscape or a cityscape which is not rich in memory and meaning.

It's been a fantastic experience making The Great British Story: A People's History for BBC Two but the schedule has been one of the toughest I've ever done.

Following Alexander over the Hindu Kush in Afghanistan or the Conquistadors through the jungles of the Amazon was actually less taxing than trying to film in all regions in Great Britain and Northern Ireland in one year!

The idea of the series is to look at history through the eyes of ordinary people, so much of the filming has involved community events.

Inevitably they take place over weekends so it's been non-stop since we started last May - but also a delight to walk the streets of the Black Country, Manchester and Swansea and the countryside of Devon and Suffolk, Antrim and Gwent.

Because we are the best documented country on earth for the last 1,000 years we can inhabit those landscapes with the people of the past, imagine their lives, and see the living connections with us.

Coupled with the energy, enthusiasm and knowledge of local communities, schools and groups across the British Isles, that has been the key to the making of the series.

Stand out stories? There are so many it's hard to single out any one, but here are a few:

Our first shoot was on the Royal wedding day last year with the Indian community at their temple in Tividale near Birmingham, and then Kibworth in Leicestershire (setting of our last series Story of England) for their raucous street party complete with a Jamaican gospel choir. That somehow set the tone!

Then at the communal dig at Long Melford one summer weekend we had half the town digging up their back gardens making amazing discoveries of their unknown Roman roots. 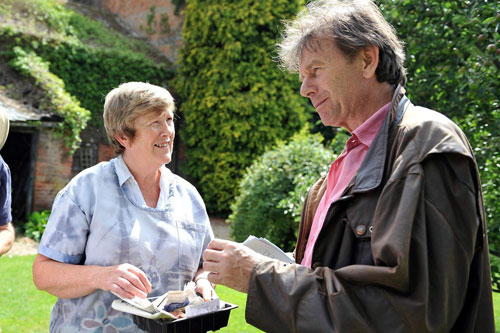 At Llancarfan near Cardiff the village open day celebrated the sensational discovery of their whitewashed medieval wall paintings.

On Merseyside and the Wirral a DNA project took Scousers on a pilgrimage to their Viking roots.

In Halesowen in the Black Country, where the history of metal working goes from 13th century cutlers to the chainmakers who made the chains for the Titanic, the children at Cradley Primary School collected the first hand stories of those chainmakers for us from their grandparents.

In this year of the Jubilee and the Olympics there is much talk about legacy and thanks to the Heritage Lottery Fund The Great British Story will, we hope, have its own afterlife.

Watch a clip from episode one: the roots of early Britain

To go with the series, the Heritage Lottery Fund have created a brand new grant scheme, All Our Stories, to give communities and groups across the UK and Northern Ireland the chance to come up with schemes that will enable them to find out more about their own local stories.

But in the immediate future I am off to Liverpool for one of the Great British Story History events that are happening all over the country - once I have admitted that I am a proud Mancunian and a stalwart red I am sure we will have a great day!

Michael Wood is an historian and the presenter of The Great British Story: A People's History.

The Great British Story: A People's History is next on on Friday, 1 June at 9pm on BBC Two and BBC HD. For further programme times, please see the episode guide.