After the amazing response to My Hoarder Mum & Me, the filming of which was mostly brought about through desperation, we have now filmed a follow up - Britain's Biggest Hoarders.

Before the first documentary my mum's house had become so full of clutter that she couldn't get through the front door without a struggle. 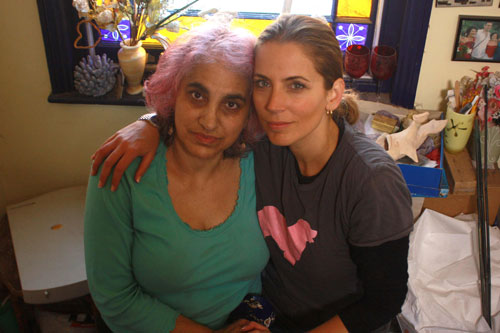 Jasmine Harman with her mum Vasoulla Savvidou at Vasoulla's home

She was sleeping on a scrap of floor in the hall as each of her five bedrooms were inaccessible.

Yet she was not still unable to face letting any of her possessions go, nor could she seem to resist the temptation to accumulate more and more stuff.

I think mum wanted to show other hoarders and their families that they were not lost causes and I wanted to continue the work we'd started, both in the house and raising awareness.

For years we all thought mum was just messy, lazy and reckless with money.

When my youngest brother (then aged 11) was removed from her home when his school insisted that it was not a suitable environment for a child, instead of motivating her to 'tidy up' things got even worse.

Although she desperately wanted him back she was paralysed and received little support from social services or the NHS.

Mum was just supposed to get on with clearing out the house on her own!

In my opinion this would be the same as telling an anorexic to just start eating, or an alcoholic to just stop drinking. It's not as easy as that.

I have to say it has been a huge relief for me not to have to hide this 'shameful' secret anymore.

Even the few people I had told about my mum's house didn't really get it and would make comments which clearly demonstrated their lack of understanding such as "I know what you mean, I'm a complete hoarder too! I've got a whole box full of magazines that I can't throw away!"

Hold on a sec, my mum will show you how to be a proper hoarder!

I really hope that through this documentary I have helped my mum and Alan and Richard, who as you'll see in the programme also struggle with too much stuff. 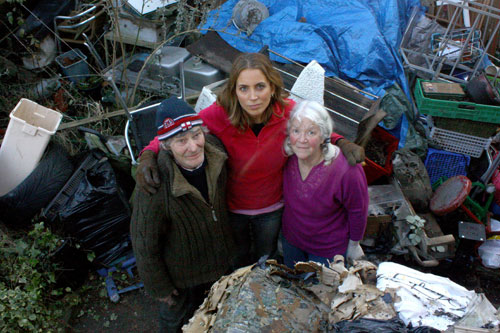 Alan and Marion Burgess outside their home with Jasmine

When I first arrived at Alan's house I saw the 5 ft high sea of clutter that filled the front garden and I could see the front door, but was left wondering how on earth I'd reach it.

Then I spotted a tiny gap which was the narrow pathway to the house.

Inside books, videos, ornaments, clothes, boxes and other items were stacked floor to ceiling, meaning the only place his wife Marion had to sit down and eat her dinner was on the toilet.

They sleep on half of a double bed as the other half (and the rest of the room) is covered with Alan's belongings and they are forced to visit friends in order to shower as their bathroom is bursting at the seams.

Alan and Richard each have different views of their hoarding.

Whilst Alan feels everything is useful and will only let perished items go, Richard sees that much of what he holds onto is rubbish but still struggles to part with anything.

He has the need to check everything which is frequently the case with hoarders.

One thing they had in common with my mum is that a crisis brought about the need to tackle the hoarding.

For Richard it was his health. When we filmed with him he had just come out of hospital suffering with chest and circulation problems, probably not helped by the fact his house was full of dust, spores and was freezing cold! 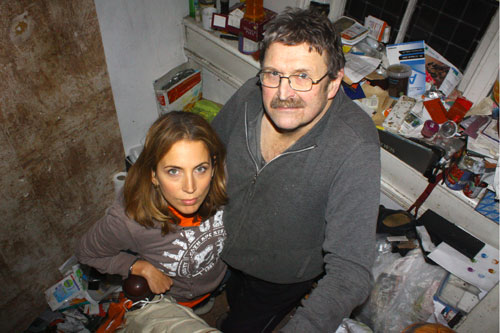 Alan's house is an eyesore and I understand that neighbours' rights must be considered. But I'd like to see local authorities offering help or support for people with his problem.

Instead the course of action Alan's council took was to threaten to prosecute him for the second time.

I feel there are other ways of going about it.

I hope the programme has gone some way to removing the stigma attached to hoarding.

Yes it's messy. Yes it's smelly and unpleasant. But people who make rude comments are the ones who should be ashamed of themselves.

After all you wouldn't laugh at someone who had any other type of illness!

I hope now many hoarders will find the courage to come forward and ask for help and I have set up a website which offers online support and resources.

Hopefully the medical profession will soon give full recognition to Hoarding Disorder and I feel proud of my mum for having been one of the first people in the country to stand up and tell all about the challenges she faces every day.

I think she has been incredibly brave and we've become closer than ever as a result of the documentary.

Crucially I now understand some of the reasons behind her hoarding and we even can have a laugh about it!

UPDATE 3 August 2012: If you are interested in being part of BBC One's follow up series to Britain's Biggest Hoarders, please see Jasmine's new post on the BBC TV blog for details.

Jasmine Harman is the presenter of Britain's Biggest Hoarders.

Britain's Biggest Hoarders is on Tuesday, 8 May at 9pm on BBC One and BBC One HD.