I've always been fascinated by the 1970s. As I was born in October 1974 I can vaguely remember some of it - mainly Bagpuss, The Wombles and the excitement of seeing Star Wars - but the politics of the day completely passed me by.

But there's something oddly compelling about the day before yesterday and that's why I was so thrilled to have the chance to turn my two books on 1970s Britain into a television series.

As a slightly nervous first-time presenter I had no idea what to expect.

But making the series has been not just an eye-opener but a joy.

Of course television has its fair share of trials, from getting up day after day at 5am to enduring the stares of crowds of Birmingham shoppers who couldn't see the camera and naturally assumed that I was just wandering around talking to myself. 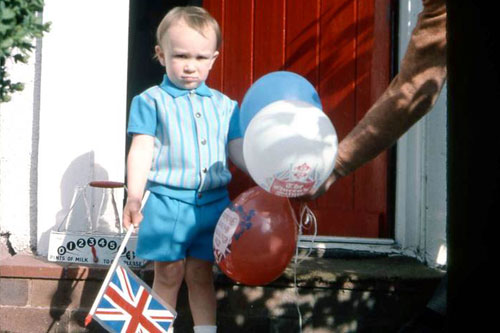 Dominic Sandbrook in the 1970s with his Jubilee balloons

Back when I was playing with my Silver Jubilee balloons and my Space Hopper - and yes I really did have one - I had no way of knowing that one day almost four decades later I'd be striding up and down in front of the camera in a long coat surreptitiously held together by safety pins.

And certainly I had no idea that as a Wolverhampton Wanderers fan I'd one day face the supreme challenge of feigning enthusiasm while filming a segment about our rivals West Brom's pioneering multiracial team of the late 1970s.

But it's been a real pleasure to work with such talented and committed people to bring my vision of the 1970s to the screen.

In particular, even I have been amazed by the wealth of archive footage that our researchers managed to dig up.

If nothing else our series will have a wealth of clips that haven't been seen since they were first shown back in the 1970s, covering everything from the first package holidays and the first credit card to schools, cars, football hooligans and glam rock.

What all of this brought home was how strangely poised the 1970s now seem.

In some ways the decade feels like ancient history.

When you watch the clips of, say, Bernard Manning on prime-time television, or of people joking about working women, or of British holidaymakers heading out to Torremolinos for the first time the 1970s seem impossibly remote.

But then you watch footage of the oil shock of 1973, or news reports about the great explosion in credit card debt, or anguished documentaries about the state of Britain's schools and the morals of our teenagers and you realise that some things have barely changed at all.

Perhaps above all then we've tried to capture the ways in which the decade of Ted Heath, Marc Bolan and Mary Whitehouse was both strange and surprising.

Will it chime perfectly with viewers' recollections? I doubt it. We all remember the past in our own way.

A woman who spent the 1970s as a teenager in Aberdeen is bound to remember them differently from a man who was, say, running a small business in Shropshire.

I'm sure many of you will disagree with our interpretation of big events like the advent of feminism, the three-day week, the Winter of Discontent and the rise of Margaret Thatcher.

But that's what history's all about: a healthy debate.

And if it gets people talking about our recent past and if it makes people think again about the 1970s, the most turbulent but also the most exciting of recent decades, then even filming at West Bromwich Albion will have been worth it.

Dominic Sandbrook is the presenter of The 70s.

The 70s begins on Monday, 16 April at 9pm on BBC Two (except for analogue viewers in Wales and Northern Ireland, who can watch on 17 April at 11.25pm and 11.50pm respectively). The series will be available to watch in iPlayer until 21 May.