When invisible forces suddenly pluck you off the ground it's a massive shock, even if you've just spent weeks trying to make it happen.

And up until that moment I was far more worried about dealing with the consequences of failure than those of success.

But as I started to get a good view of the tops of people's heads and registered the weird, unexpected near silence of flight I realised I had but an instant to figure out how to control and power a brand new aeroplane.

When myself and my two mates Chris Hill and Jim Milner start designing and building the more extreme stuff for Bang Goes The Theory I know I'm probably going to be the test pilot.

In some ways it's great but you don't half feel the responsibility.

Often the first chance we get to properly test a completed item is the day the cameras arrive. And I know that all the effort that we've put into it will mean very little if I don't somehow get it to perform on the day.

Designing and making a plane that works on pedal power took the most amount of resources we'd ever put into a job.

Before dawn on the day of our attempted flight even the boss of the programme was at Lasham airfield along with the camera crew.

There was also a crowd of pilots, photographers and eminent aero engineers who very much liked the look of the machine we'd constructed.

But Lasham is a working airfield and I knew that we only had a two hour window to try getting our plane airborne before the real planes started to come in and we had to stop.

If nothing happened in that time all we'd have really managed was to build a very odd looking bicycle.

Almost everything else we'd ever built for Bang Goes The Theory were things that I'd been thinking about for months or sometimes years until I felt they were ready.

In all that time however, an image of a one man aircraft that had to be pedalled into the sky had never once crossed my mind - until this series when Alex our producer planted it in there very firmly.

Also whilst filming at the new Olympic velodrome in Stratford for episode six there were a bunch of interviews with British Olympians being played out on the big screen behind us.

Over half of them said that the superpower they would most like to have was to be able to fly.

The thing is by then I knew that they all actually had enough muscle power to do it they just needed someone to build the correct exoskeleton - and that's what we were on to. (In some ways it's a plane but in many ways it really is just the exoskeleton a human being needs to put on in order to give them the power of flight.)

Back at the airfield with me in the cockpit, the first attempts didn't look good at all. 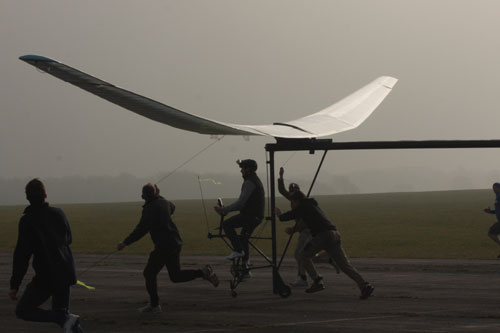 Jem and the Bang team start the experiment at dawn

Although the early morning was almost as still as you could hope for, there was a breath of wind and we couldn't risk that flipping the lightweight plane.

So I had to pedal into the wind, which meant across the width - rather than down the length - of the runway.

With only a few metres of tarmac to gather speed we had no idea if I'd be quick enough to take off.

Pedalling uphill to avoid that side wind I couldn't seem to get any decent roll control. You have to turn towards the upward wing so the other wing effectively speeds up, gets more lift and evens things out - great in theory. Grrr.

The aeroplane turned uncontrollably, ploughing its precious and delicate wing into the ground.

I bailed out to try to minimise the impact on the airframe but luckily we discovered that if handled thoughtfully the craft seemed more robust than we'd ever hoped.

Now massively feeling the pressure we headed for an old part of the runway.

With a little headwind and flatter ground I got a small hop. I could tell because the sound of the wheels on tarmac suddenly went briefly silent.

At this point though some of the amassed eminent figures in aviation were questioning my piloting - was that really the reason it was almost bound to the ground?

We decided to put a pretty fit and phenomenally experienced pilot in the hot seat.

He too only managed a very small hop but crucially he was able to give me definite advice on using our homemade control system. 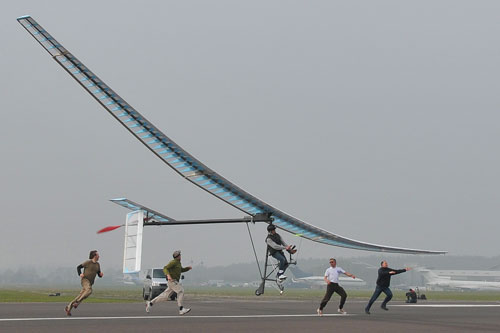 I took on board everything he said and cycled into a sensation that I simply didn't know existed. It's literally like being plucked from the ground.

Flying in a pedal-powered aeroplane feels like you've just dragged something out of the world of cartoons and into the fringes of reality.

It wasn't a huge flight - seconds long and 30 yards at best - but we'd definitely made an aircraft.

An aircraft powered by a fairly ordinary human.

In the history of the world it's highly likely that man is by far the heaviest creature ever to fly using muscle power alone. I now hope it happens far more often and gets easier with every attempt.

Jem Stansfield is a presenter of Bang Goes The Theory.

You can watch the human-powered plane take flight in episode seven of Bang Goes The Theory on Monday, 30 April at 7.30pm on BBC One and BBC One HD in Scotland, England and Northern Ireland. Viewers in Wales can watch on the same day at 8pm on BBC Two. For further programme times, please see the episode guide.