Bang Goes the Theory's resident engineer, inventor and presenter Jem Stansfield is a man who seems to have done pretty much everything: from building a pair of Spiderman-style gloves powered by vacuum cleaners that allows him to scale the sides of buildings to fulfilling that childhood dream of going 'all the way round' on a swing... with the help of a rocket strapped to his body.

From series four: Can Jem go 360 degrees on a swing?

But, despite having a degree in aeronautical engineering, he had never attempted to build a real flying machine.

In fact, he says, that is precisely because of his training. If it taught him anything, it was how difficult it is to build anything that has to go airborne.

So it must have been a real moment of weakness back in December 2011 when, whilst mulling ideas for the current series of Bang, we came across footage celebrating the 50th anniversary of human-powered flight.

Seeing an aluminium and wooden plane pedalled into the air by an enthusiastic young pilot called Derek Piggott at Lasham Airfield in 1961 had a certain charm to it that attracted Jem's attention.

Inspired by this, and a visit to a team of young engineering students at Southampton University trying to emulate their forebears' achievement, we thought that this might actually be something we stood a chance of being able to do.

Only a handful of aircraft have ever made it off the ground powered by a person's own muscles.

Those that succeeded have generally been the culmination of years of dedicated work - sometimes by huge teams of highly experienced aeronautical engineers - and pedalled by athletes who train to an international competitive standard.

Jem's a keen cyclist, but no elite athlete. 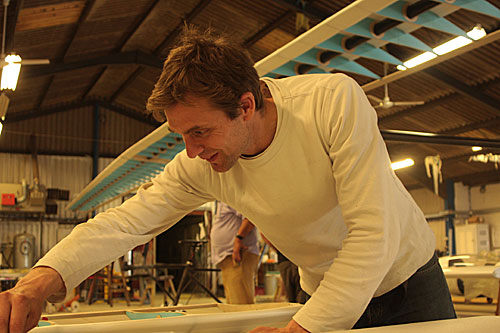 He and the core team of two Bang engineers had no experience of working with carbon fibre - the material of choice for strong and light craft.

For them to build a plane that stood any chance of taking off in a matter of weeks, and to take on the task of pedalling it into the air seems, in retrospect, rather over-optimistic.

Add to that the facts that Jem had never flown a plane before, and he would have to control the craft whilst pedalling as hard as he could, and it seems simply impossible.

So now, a few months later, the small team of us find ourselves at Lasham airport, unpacking a bubble-wrapped package that contains the vast structure of our aircraft.

The wings alone are 23m across - roughly the size of a Boeing 737. Yet, being built mostly of foam and a kind of cellophane, the whole plane weighs only two thirds of Jem's weight.

Only now, with an aircraft hangar at our disposal, can we put the pieces together to see our plane for the first time.

We're waiting for an early morning without a breath of wind because the merest gust could send the vast lightweight structure tumbling sideways.

Meanwhile Jem has to try to grab some sleep... between practising on his home-built training bicycle (which runs flight simulator software whilst he pedals hard enough to power three 100 watt light bulbs) and putting the finishing touches to the aircraft that we all hope will, very soon, make its maiden - and possibly only - flight.

If it does, we will have shown the childhood dream that so many of us have of being able to fly isn't, perhaps, as impossible as it might seem...

Alex Freeman is one of the producer/directors on Bang Goes The Theory.

You can see how the human-powered flight experiment turned out later in the current series. We'll add the episode date and time here once confirmed.

Bang Goes The Theory continues on Mondays at 7.30pm on BBC One and BBC One HD in Scotland and England, and BBC Two in Northern Ireland and Wales. For further programme times, please see the episode guide.