I wanted to play Miss Havisham because she's an iconic character who pervades our world in various forms. So many people have written about her or based other characters on her over many decades.

I was interested in what it was that was so appealing about her, what it is that seems to get under people's skin. 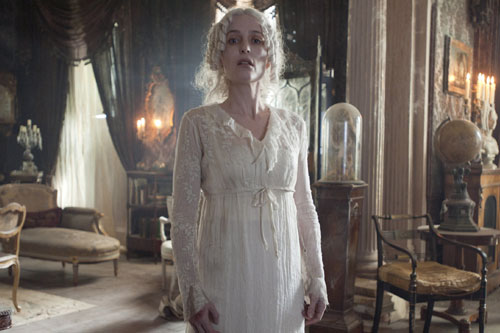 We're talking about a woman who is deeply, almost psychotically manipulative and potentially really psychologically damaging to Pip and Estella, the two children that we see her have this direct impact on.

There was a curiosity there for me. Also reading the scripts and appreciating the adaptation but then also going back and reading Great Expectations and kind of falling in love with her complexities.

I don't know how much of that was about falling in love with my interpretation of her, or what I was getting off the page of the script.

I've tried to remember what my innocent reader's eyes were picking up on when I first took a look at Great Expectations when I was younger and whether she still held that position for me in terms of awe, as she does now.

I have a feeling it was probably different, a very uncomfortable take I had on her really early on.

I don't know whether my ideas are based on other people's ideas of how she's been built up over time.

The bottom line was knowing that the BBC would do a spectacular production.

Trailer: 'Your eyes have been opened... and now you cannot close them'

I think probably my favourite room on the set was the drawing room of Satis House because of the depth of it, the depth of the history, the muted colours, the butterflies, the birds and then the decay on top of all of that, the vastness, the height of the ceilings and the shafts of light just barely peeking through the windows... all of that.

I also really admired Sarah Phelps' adaptation and felt this was the one I wanted to be involved in.

Great Expectations is my favourite Charles Dickens book, because I feel like it has a humanity to it that has always moved me.

That starts at the very beginning with Magwitch being moved by Pip's bravery, of identifying the fact that this young boy is going to save a stranger by stealing the file from the one person he loves, and the person who loves him.

The heartbreak of Pip deciding to do that act and then at the last minute, grabbing a piece of pie for Magwitch.

It's recognised in that moment as Pip hands the pie over, that it also breaks Magwitch's heart.

That moment of pure innocence and humanity not only transforms Pip's life - unfortunately also in a negative way - but transforms those two human beings.

It opens Magwitch's heart in a way it has not been opened up before. It also carries you through the rest of the book, because it's a pure moment of one human being's kindness to another against everything he knows, up until that point.

I think Dickens' novels endure because there are common recognisable themes.

His characters are so complex, so multifaceted, painful and tragically human. But also he draws such interesting stories - he is a wonderful storyteller.

I am sure it also matters when somebody read the book and what their situation was at that particular time.

A lot of people I know who said Great Expectations is their favourite book are men.

Did they read it when they were pre-pubescent and feeling lost and misunderstood? Pip is feeling the awe of the wider world, the world beyond, and how Miss Havisham draws him into that, and opens his eyes and his heart, ultimately to crush it.

I can imagine being a young man, and reading Pip's journey, falling in love in a mysterious way in this magical house where you have come from the hardship of working in a forge and having lost all of your brothers and sisters save one.

And here's hope, here is a door to the rest of the world - and then having that shut and then reopened.

I can imagine that journey as a young kid, especially a young boy, must be unbelievably exciting.

It was the journey pre-Harry Potter. Of course it was longer ago, but I can imagine young people having the same kind of magical response to Great Expectations that we did when Harry Potter books first started to come out.

That's if it does get introduced at an early age, in school or through a parent or whatever and the child is able to crack the density of it.

I can only imagine the magic of it and the immersion in that world at a younger age.

Great Expectations starts on BBC One and BBC One HD on Tuesday, 27 December at 9pm.

Watch Gillian (in costume) talking further about the Great Expectations script and set.

Read an article by Mike Osborn on the 'youthful' air of Gillian Anderson's Miss Havisham.