Horizon: Do you see the same colours as me?

Back in April this year I was called to a brainstorm with the Horizon production team to discuss the science of colour.

It seemed like such a fun and compelling idea and addresses the kind of questions we've all asked ourselves. Do you see the same colours that I see? What if what I see as yellow, you really see as blue? And why do I fancy you more in red?

Scientists and contributors answer the question "What is your favourite colour?"

Clearly the intelligent questions of a scientific mind... but these really are some of the questions that scientists all over the world are asking. And, as the show's director, I jumped at the chance to make this episode and find some answers.

As we looked deeper into the scientific research, the more we found that this is a world which is just beginning to be properly explored. The scientists were bright, curious, often rather quirky, and full of fascinating discoveries.

One of the first people we met was neuroscientist Beau Lotto - a master of illusions who wanted to do an experiment to find out whether people of different ages, gender and nationality see colours in the same way.

Eight weeks later, there we were with 150 people, filming the Beau Lotto colour experiment bonanza.

The volunteers took part in eight different experiments veering from whether colour had an impact on time passing, to looking at how people made different colour patterns in mosaics, to what emotions people associated with different colours - red for anger, blue for tranquillity?

The results shocked even the scientist involved. Beau found that colour really can impact the passing of time.

Volunteers were asked to stand in three different colour pods bathed in either blue, red or white light, and Beau found that blue light made time pass more quickly and red seemed to slow it down.

"Red makes us highly aware of our environment and so time slows down in your mind," he says.

Another experiment found that women who are made to feel more psychologically powerful and in control were more sensitive to spotting changes in colour illumination.

Overall it seemed that depending on the experience we bring with us, our perceptions of colour can vary from person to person.

Beau says, "In thinking about 'do you see what I see', the answer depends on what it is we're looking at. If it's something that's shaped by our own individual experiences, then we can see the world very differently."

We really do perceive colours differently depending on experience, age and state of mind. 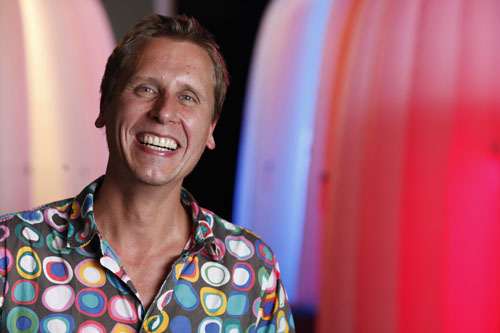 Something else we found was that there were scientists looking at whether language can influence the way we perceive colour. Could the number of words you have for colour affect the way you perceive it?

The only way to find out was to go to a civilisation far from the technicolour world we live in, to a tribe who have only five words for colour, compared to the 11 essential colour categories.

The Himba of northern Namibia - who had never even set foot in a local town - call the sky black and water white, and for them, blue and green share the same word.

In having fewer words than us for colour, it seems that their perception of the world is different to ours - it takes them longer to differentiate between certain colours, and so we can determine from this that they see the world a little differently.

The tribe found us a bit of an oddity - they hadn't been filmed before - so when I played them back the footage we had filmed they thought it was the most hysterical thing they had every seen.

And what about the effects colours might have on us?

Scientists Russell Hill and Iain Greenlees were looking into the 'winning effect' of the colour red. They organised an experiment to see if wearing red might have an impact in sport.

They set up a penalty shoot out with 48 footballers looking at whether it was wearing red or seeing red that made the difference.

They found that the men wearing red had lower levels of cortisol, the hormone for stress, than those in blue or white. This in turn makes them more confident in their game.

These are just a few examples of the people we met and filmed. The whole thing was a technicolour experience that made us see the world through different eyes - and more than that, made us realise there's more to come.

This, for once, is a relatively new subject in the world of science, so there are many more discoveries to be made.

So when you get up tomorrow, look around you. Think about what colours you are going to wear and think about the colours you see - do you really see what I see? Probably not.

Sophie Robinson is the director and producer of Horizon: Do You See What I See?

Horizon: Do You See What I See? is on BBC Two and BBC HD at 9pm on Monday, 8 August.

Beau Lotto has written about how we perceive colour for BBC News.