How we transformed Lark Rise's sets for The Night Watch

I am responsible for the look and feel of the show. It is my job to convince you that you really have stepped back in time to the Blitz era - that you are living and working in London and experiencing those events alongside the characters in the film.

I am responsible for not only designing the sets - both interior and exterior locations - but also for the props required to dress these sets, the vehicles that will drive along the roads, the sandbags that will line the streets, even down to the street signs.

Trailer for The Night Watch

All of this information and detail needs to be clearly researched. The Blitz is a period of history that many people alive today are more than familiar with.

We did this by using the internet, extensive library and photographic research, newsreel footage, and by talking to people who lived through it.

One of the provisos was that, due to the inevitable budgetary restrictions, we would have to utilise the interior stage sets of Lark Rise (standing in two industrial units just outside Bristol) for The Night Watch.

This was not an inconsiderable feat. How do we turn late Victorian interiors into 1940s interiors without you noticing the joins?

I had already read Sarah Waters' book a few years before, but after reading the script of The Night Watch it seemed very important to re-read the book for inspiration and for information.

There is so much detail in the book about the way some of the rooms are decorated, the way that they are dressed, the little details that provide so much information about these very complex characters.

Some, in fact lots, of these little dressings go unnoticed by many people. The camera can only focus on one thing at a time and that is usually the actors.

But anything that we, as an art department, can do to enhance the environments that we have created for these characters to live, and move and talk in, can sometimes make a big difference.

We had about two weeks between finishing shooting on Lark Rise to the first day of shooting on The Night Watch, though we had been prepping for two or three weeks prior to that. 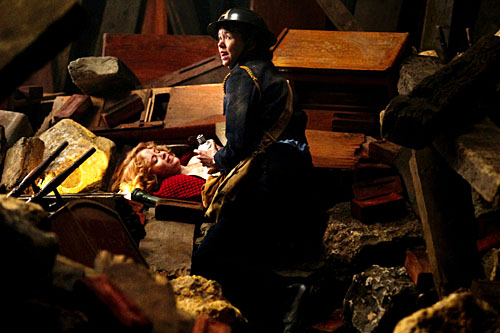 I think we built and dressed around 85 interior and exterior sets and locations. That's an enormous number, especially in the time scheduled both to prepare the show and to actually film it.

Our scheduled four-week shooting period was an incredibly short space of time for such a large, complex and detailed piece.

The script heading might say, for instance, "Julia's flat" but within Julia's flat would be Julia's study, Julia's bathroom, Julia's bedroom and so on.

The production team had to schedule so that the sets we needed first for The Night Watch had to be used early in shooting Lark Rise so that we could take them over and transform them.

It would be interesting to know if you noticed that Mr Mundy's house was actually the Pratt sisters' parlour, the introduction agency was the Golden Lion hotel function room, and Julia's hall, kitchen and study was, in fact, The Golden Lion reception area?

We filmed The Night Watch in November and December 2010 - one of the coldest winters in living memory - often filming in temperatures in the region of minus five to -10 degrees, sometimes lower.

Much of the bombsite debris that we laid down on the ground (most of which, incidentally, was made of fibreglass and rubber) was actually freezing to the ground, making it difficult for the props team to move it around in between takes.

We also used real furniture that we had purchased from reclamation stores and broke up to use as dressing, particularly on the bombsite locations.

The eagle-eyed amongst you may have noticed the same piece of dressing table used in two or three different locations.

None of the exterior sets of Lark Rise were used for The Night Watch. Instead we filmed outside scenes in Bath and Bristol as a stand in for London.

The largest of the bombsite locations was a place called the Grosvenor building in the centre of Bath.

This was used for a number of locations including the prison canteen and visiting room (they were the same room redressed), the underground tube corridor, and the bombed-out cellar where Kay rescues Helen.

Helen is rescued from the rubble

The exterior of that building was used for the bombsite location, where Kay is searching frantically for Helen.

The opening shots of that sequence, where the camera pans down off the window of a bedroom and then tracks past the exposed broken edge of the building, was all shot in one night.

The damaged building that you see was the real building, though heavily braced and supported, and visited by BBC Health and Safety before we were given permission to use it.

The Night Watch was, without doubt, the hardest job of my career, for many reasons.

But, on the night when we were filming the scene where Kay attends the bombsite where she finds the dead children in the Anderson shelter, one of the extras used in that scene came up to a member of my department.

They said that as a child, during the Blitz, they used to play on bombsites like that and, to quote, "It used be just like this, it really takes me back."

In moments such as that you feel, well, maybe regardless of everything that was against us - time, money, etc - maybe we did our job properly. Maybe?

Martin Boddinson is the production designer on The Night Watch.

The Night Watch is on BBC Two at 9pm on Tuesday, 12 July.

Read a post by The Night Watch and Lark Rise To Candleford's costume designer, Pam Downe, on the BBC TV blog.